Kitatta, 39, is battling charges of unlawful possession of fire arms and military equipment. 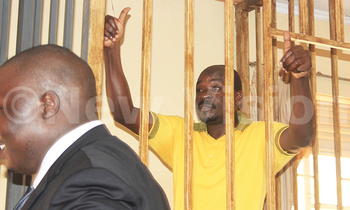 On Tuesday, Kitatta through his lawyer, Shaban Sanywa, asked the General Court Martial (GCM) presided over Lt.Gen Andrew Gutti to release him on bail on grounds that he will not interfere with investigations and influence witnesses.

"Since investigations into the matter are complete, Kitatta will not interfere with it," Sanywa argued.

Kitatta also said he still has responsibility as the NRM chairman for Rubaga division and a sole breadwinner of his family, which two responsibilities he cannot ably dispense while in custody.

Kitatta, 39, is battling charges of unlawful possession of fire arms and military equipment.

Prosecution alleges that the accused on January 21, 2018, while at Vine Hotel, located at Wakaliga, in a motor vehicle Reg No UAK 135B, were found in possession of a SMG gun, pistol without holding a valid firearms certificate.

According to prosecution, the said ammunitions are ordinarily a monopoly of the defence forces.

The accused were represented by Joseph Kiryowa and Lt. Brian Mogi.

The accused were later remanded to Luzira Prison until February 27. The accused had spent a month at Kigo Prisons.

The arrest of Kitatta followed a crackdown on suspects linked to the murder of Francis Ekalungar, the former accountant of Case Clinic. Most of the suspects are Bodaboda 2010 members.

Ekalungar was kidnapped on January 2, by unknown assailants on his way to dfcu Bank to deposit over sh15m belonging to the hospital. A day later, his body burnt was found at Kajjansi off Entebbe Road.