The convention is set for May 9. 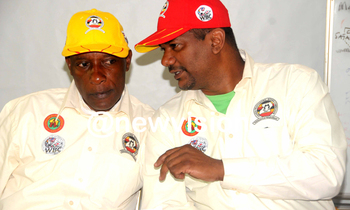 "I will sponsor the convention on May 9," promised Uhuru immediately after being elected unopposed with his entire executive at the weekend.

Uhuru, also the proprietor of the famous chain of Uhuru restaurants, takes over from Bbossa Kiyingi, who has been in charge since 2013.

Uhuru has also set reconciliation with rival body UBU as a key target of his four year term.

Uhuru, who rose from vice presidency in the previous executive, has also promised to increase the number professional fights.

"I have come to streamline the sport and that's why I have co-opted former members of UBU on the Commission. We should work together because if I fail, we shall all have failed," Uhuru stated after outgoing Kiyingi handed over the tools of instrument.

The outgoing team was criticized for being inactive. "I will promote the establishment of boxing camps for boxers and refresher courses for referees."

Uhuru will for starters next month take his executive to Kenya for a referees conference.

Securing a ring for the commission is another of his priorities. "I am tired of borrowing rings. The last time we hired one it collapsed in Jinja."

Kiyingi said they have spent five years in office instead of four to finalize the government requirement of statutory registration at NCS.

He also said boxers should comply with the new continental zoning where Africa has been regionalized into five divisions.

"Uganda is in East and Central Africa zone. You must first win the regional title before challenging the continental," he told boxers and promoters before elections.

"The women, referees, promoters and boxers committees will soon organize their respective elections.

Former UPBC president Mindra challenged young boxers to strive improve their records with regular fights. He also advised against hiking of fight fees which he said scares away promoters.