At a solemn ceremony at Kasumigaseki station, one of the targets of the 1995 attacks which is surrounded by key government buildings, Tokyo subway staff gathered to observe a moment of silence and offer flowers. 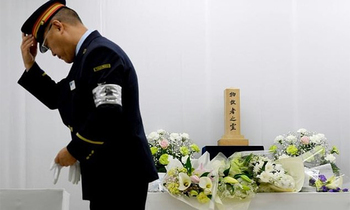 PIC: Train employees pay their respects at the site where passengers were overcome by sarin gas. (AFP)

JAPAN - Japan on Tuesday marked the 23rd anniversary of a deadly sarin attack on the Tokyo metro, as speculation grows that members of the cult behind it could soon be executed.

At a solemn ceremony at Kasumigaseki station, one of the targets of the 1995 attacks which is surrounded by key government buildings, Tokyo subway staff gathered to observe a moment of silence and offer flowers.

Thirteen people were killed and thousands more injured when members of the Aum Shinrikyo cult released bags of sarin on packed rush hour trains, piercing the pouches with sharpened umbrella tips before fleeing.

Passengers streamed out of stations vomiting, coughing and struggling to breathe, with emergency services administering life-saving treatment by the side of the road.

Ambulances streamed through the streets, and helicopters landed on major roads to assist the evacuation of those affected.

On that day, Tokyo Metro worker Kazumasa Takahashi unwittingly picked up a punctured packet of the nerve gas from the floor of one of the trains at Kasumigaseki station.

He and another colleague died.

"I came here today, with the same feeling I have every year," his widow Shizue told reporters at the station after paying tribute to her late husband.

"The health of some victims is deteriorating and some families are also going through a tremendously difficult time," she said, adding that the passage of time had not healed the pain suffered by victims' families.

After years of legal proceedings, the prosecution of 13 Aum Shinrikyo members on death row for the attacks and other crimes finally concluded in January, clearing the way for their execution.

Last week, authorities began separating and transferring them to different detention facilities equipped with the infrastructure to carry out executions by hanging.

The transfers have prompted speculation that cult leader Shoko Asahara and the 12 of his followers on death row could soon be executed, though there has been no official indication.

Japanese authorities usually announce executions after the fact, with no advance warning.

Shizue Takahashi said the fast speed of transfers initially startled her, but stressed that the executions must proceed in due course.

"The death penalty came as the result of long trials, and it has entered the next phase," said Shizue Takahashi.

"It is not at a phase where I can say or do anything about it. I feel that steps should be taken in accordance with the law," she said.

Some experts however oppose the executions -- with the exception of Asahara -- saying authorities risk transforming the other 12 into "martyrs" that will help the Aum's successor cults to recruit new members.