In a phone call with British Prime Minister Theresa May on Tuesday, Trump said Russia must "provide unambiguous answer. 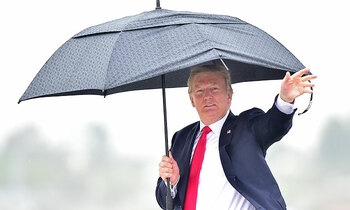 PIC: US President Donald Trump waves while walking under the rain on arrival in Los Angeles, California on Tuesday. (AFP)

US President Donald Trump demanded an explanation from Moscow over the poisoning of a former spy in Britain as London's deadline for answers expired, with Russia threatening retribution if it is punished for the Cold War intrigue.

Moscow has slammed the accusations that it was behind the attempted murder of a double agent, defying the midnight Tuesday (00:00 GMT) ultimatum set by Britain to explain how a Soviet-designed nerve-agent found its way onto British streets.

The attempted assassination of Sergei Skripal and his daughter Yulia in the English city of Salisbury on March 4 sparked a deepening diplomatic row that pits Russia against Britain and its allies the United States, NATO and the European Union.

British Prime Minister Theresa May, who will outline London's response to the escalating crisis on Wednesday, has pointed the finger at Moscow, which she said was "highly likely" to be responsible.

In a phone call with May on Tuesday, Trump said Russia must "provide unambiguous answers" to explain what is believed to be the first nerve agent attack in Europe since World War II.

The two leaders "agreed on the need for consequences for those who use these heinous weapons in flagrant violation of international norms", the White House said.

In Moscow, Foreign Minister Sergei Lavrov insisted "Russia is not guilty", saying it was ready to cooperate with Britain but complaining that its request for samples of the nerve agent had been rejected.

The Russian embassy said it had formally demanded Britain allow a joint investigation, saying "without that, there can be no sense in any statements from London".

In the first sign of the practical implications of the growing diplomatic crisis, Russia threatened to bar all British media from working in Russia if British authorities banned the Kremlin-backed RT broadcaster.

British regulator Ofcom has warned it could review RT's licence if Russia were found to have been responsible for the attack on Skripal, who came to Britain in a 2010 spy swap.

Skripal, 66, and his daughter Yulia, 33, remain in critical condition in hospital after being found unconscious on a bench outside a shopping centre in the southwestern city of Salisbury.

The British government believes a "Novichok" Russian nerve agent was used and on Monday May called on Moscow explain whether the attempted murder was a state-sponsored attack, or whether it had "lost control" of the substance.

She demanded Moscow disclose details of the development of the Novichok nerve agents programme to the Organisation for the Prohibition of Chemical Weapons (OPCW).

Pharmacology experts said Novichok, a broad category of more than 100 nerve agents developed by the Soviet Union during the late stages of the Cold War, was "more dangerous and sophisticated" than sarin or VX.

May will gather her National Security Council on Wednesday morning "to discuss the response from Russia", and will then give a statement to MPs, her spokesman said.

The prime minister has said that her government was considering a British version of the US "Magnitsky Act", which was adopted in 2012 to punish Russian officials accused of human rights violations.

Foreign Secretary Boris Johnson attempted to rally support on Tuesday by calling his counterparts and vowing that if Russia was responsible, "this would be further reckless behaviour which threatens the international community and requires an international response".

NATO Secretary General Jens Stoltenberg said the incident was "of great concern" amid reports that Britain was consulting NATO allies about possibly invoking its Article 5 principle of common defence.

'They will not recover'

Vil Mirzayanov, a chemist who worked on the Novichok programme and now lives in the United States, said the nerve agent's effects were "brutal".

"These people are gone -- the man and his daughter. Even if they survive they will not recover," the 83-year-old told The Telegraph newspaper.

A policeman was also taken ill, and police revealed Tuesday that 35 people were assessed at the time, all but one of whom were swiftly released. That person is being monitored as an outpatient.

The case has prompted comparisons with the 2006 radiation poisoning of former spy and Kremlin critic Alexander Litvinenko, which a British public inquiry blamed on Russia.