The escapees have transformed the once sleepy town of Boa Vista, capital of Roraima state. 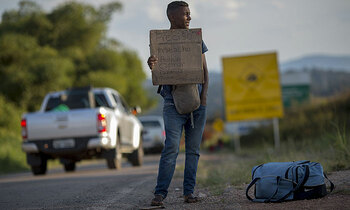 PIC: A Venezuelan refugee tries to hitchhike a ride on the roadside of Pacaraima, Roraima, Brazil. (AFP)

Manuel and his wife never stop coughing but they're happy: at least their baby doesn't have measles anymore.

They're grateful for small mercies these days, but just a few years ago they were part of oil-rich Venezuela's middle class. Today they live with hundreds of others who fled political and economic chaos to seek refuge across the border in Boa Vista, Brazil.

The escapees have transformed the once sleepy town of Boa Vista, capital of Roraima state.

Last year a shelter was opened at a gymnasium but it could not hold the out-of-control influx of Venezuelans seeking refuge wherever they can -- in squares, parks and street corners.

At the Tancredo Neves gymnasium shelter the refugees live in hammocks, or little huts. Clothes hang everywhere and you're considered lucky if you get a mattress.

There's space for 180, according to the UN refugee agency, but an estimated 600 people are now resident there. About 40,000 Venezuelans are scattered across the state, the Boa Vista mayor's office says.

Most are from eastern Venezuela, while more than half a million have fled from the west of the country into Colombia, hoping for a break from the violent unrest and economic meltdown plaguing the country under President Nicolas Maduro.

The smell of wood smoke fills the gymnasium, where many cook, using tins as improvised pots. Some get rice, pasta and vegetables but those who cannot buy food go to a charity kitchen where donated food is served.

The dirt and poor ventilation are overwhelming.

"You can't eat this," said Katiuska, 43, looking into a rice soup cooked in a dirty old tin.

Four months ago she left Venezuela with her husband and two sons "to change our lives," but she's discovered that in Brazil "we don't live -- just survive."

They sleep in a cardboard shelter under a tree. It's actually one of the better spots, offering shade in a city where the thermometer hits 97 F (36 C).

It won't do them much good when the rainy season starts, however. The vulnerable migrants are now increasingly at risk of contracting and spreading tropical diseases.

"The Venezuelans' situation is getting worse at this kind of shelter because it's unhealthy and promotes the spread of illnesses," said municipal doctor Raimundo de Sousa.

There's still an attempt to keep up morale.

A group of young men boiling water on a fire for coffee joked that a chicken running around the yard was also homeless.

"That chicken's only alive because it's not in Venezuela," where people struggle to get enough food, Luis, 19, said.

Volunteer cooks say they do everything they can to make sure everyone gets a meal. There are never any leftovers.

Monica Becker, 31, was cleaning up her infant son.

She'd come all the way from Puerto La Cruz on Venezuela's Caribbean coast, about 620 miles (1,000 kilometers) away. By the time she reached the border with her two sons, she was out of money and only reached Boa Vista with help of a church group.

Becker is grateful for a place to sleep but wishes the toilets were better -- there are just two for everyone at the center and the smell is powerful.

When she thinks of her mother and brother, who remained in Venezuela, Monica cries. "I didn't want my children to die of hunger, so I came here."

A ragdoll, and tears

Norbelys Linares, another migrant, is also feeling overwhelmed by the misery of life in the gymnasium.

It's located in a cramped, poor neighborhood of Boa Vista and police stand outside. They've installed security cameras and monitor who is going in and out.

"It's horrible. I don't want this for my daughters," she said.

Linares, 33, works at a market, earning a little and getting food. When she can she saves six dollars -- roughly what most Venezuelans earn every month in wages and food stamps -- to send home for her nine- and 12-year-old daughters' education.

"I prefer they don't eat if they can still study, so that they can become something in life," she said.

Linares was studying accountancy before she left her country. Now her hope is that she can help her daughters get a better start in life.

In her backpack she carried a rag doll.

"I bought it for them," she said, hugging the doll tearfully. "At least I feel as I have them here with me."