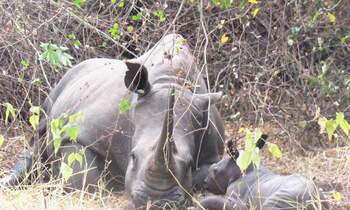 PIC: The newborn rhino and its mother. (Credit: Frederick Kiwanuka)

NAKASONGOLA- The population of rhinos in Uganda has swelled to 22 after yet another member of the highly endangered animals was born at the Nakasongola-based Ziwa rhino sanctuary recently.

The newly born rhino, which is the 17th to be born at the sanctuary, was born to Kori and Moja on Wednesday.

Ziwa Rhino Sanctuary, which is based in Nakasongola  district, was established to reintroduce the highly  endangered  into Ugandan national parks through a breed and release process. Initially, six adult rhinos were imported into the country from Kenya and the US.

Angie Genade, the South African manager of the Nakasongola-based Rhino fund Uganda, an NGO that runs the sanctuary, said she was expecting four more births during the course of this year to bring the number of rhinos in the country to 26.

Rhinos had become extinct in Uganda as a result of the wars and poaching activities.