Brazilian women say 'No Means No' at carnival

The feast of excess is also often the backdrop for a slew of sexual assaults, particularly against women. 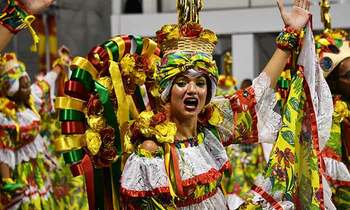 PIC:  A reveller of the Mocidade Alegre samba school performs during the second night of carnival in Sao Paulo, Brazil, at the city's Sambadrome on Saturday. (Credit: AFP)

BARZIL - "No means no" is a new battle cry for Brazilian women mobilising against assault at carnival, a raucous party whose free-wheeling atmosphere leaves women particularly vulnerable to unwanted sexual contact.

In the wake of the Harvey Weinstein episode that triggered the #MeToo campaign against harassment in the US, Brazilian women are out in full force - with some even sporting temporary tattoos with the message emblazoned across their shoulders, arms and chests.

Rio's carnival - the world's largest - falls during the city's pre-Lenten blowout which draws millions of near-naked revellers dancing as the alcohol flows, and flows.

The feast of excess is also often the backdrop for a slew of sexual assaults, particularly against women.

Luka Borges, therefore, is tirelessly distributing the temporary "No Means No" tattoos as part of a street parade - known as a "bloco" - set to samba tunes in Rio's centre.

"There is a lot of machismo in Brazil -so doing this for carnival is really pressing," the 28-year-old project manager told AFP.

"We women spend much more time out in the streets, wearing less clothing - then this is their pretext for aggression."

Borges created with four friends "No Means No" tattoos, and began distributing them to women last year during some of the city's blocos, after one of them was harassed.

Thanks to social media and a crowd-funding campaign, some 27,000 tattoos have been produced for the 2018 carnival, in Rio as well as cities including Salvador, Sao Paulo and Olinda.

"A lot of the time, at past carnivals, we were harassed and did not even realise it," said Anna Studard, a 27-year-old theater producer. "We thought it was normal! But I think in the past couple of years we have started to realise that 'no means no.'"

Carnival, with its totally uninhibited and ultra-sexy atmosphere, is widely seen as a moment partiers can kiss and touch strangers without concern.

Yet far from taking a puritanical turn, the women behind this campaign simply say they are simply trying to bolster the "my body, my rules" concept already familiar to many in Brazil.

"If we continue to cover ourselves, to hide, the youngest girls will have to continue to protect themselves," said Borges. "I think it is a political act to walk around with bare breasts, for example."

For some Brazilians, the "No Means No" temporary tattoo sends a message beyond feminism.

"My fiance is travelling. And this tattoo will prevent anyone from spoiling my party; I feel safer," said Caroline Fachetti, 19, who sports a striped swimsuit top and blue short shorts.

Beside her, six English tourists drink beers and take in the scene.

"It is totally appropriate," said James Allan, 28, of the campaign. "Brazil is years behind Europe."

The situation for women in Brazil is not only precarious during carnival.

One in three women over the age of 16 has reported being physically, verbally or emotionally abused, according to a Datafolha survey published in March 2017, looking at data from the previous year.

That is why Borges refuses the tattoos to men, despite welcoming their moral support.