The United Nations has about 20 special envoys, some of whom take on short-term missions, others who plod on for decades 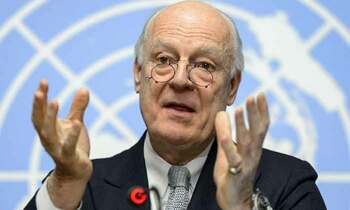 US - They often go by the description of jack of all trades and have a reputation for being thick-skinned, perseverant, experienced and willing to take on a mission impossible.

The men and women who take on the job of UN special envoy to the world's trouble spots seem to be drawn to the challenge of confronting horrors in places like Syria, Libya or the DR Congo.

The United Nations has about 20 special envoys, some of whom take on short-term missions, others who plod on for decades.

"They get upbraided by one side and then the other, they are the focus of any frustration."

Some missions may not be dangerous, such as reuniting Cyprus, finding a name for Macedonia that will satisfy Greece or resolving decades of disagreement over the status of Western Sahara, but these can be just as intractable.

"They have to show so much humility and patience and know when to jump at an opportunity to create conditions for dialogue," the diplomat said.

"It is like being a master chess player and asking others to move the pieces on the board."

A UN official, who also asked not to be named, said the envoys are "civil servants - with convictions and a healthy ego."

For most UN envoys, the job is seen as "a big privilege," he said.

Success for a peace envoy hinges not just on diplomatic acumen, but also on the willingness of the parties involved and, in some instances crucially, on the support of the big powers at the UN Security Council.

In Colombia, these conditions are all met and UN work to support the peace deal with the FARC rebels is often singled out as an example of a peace mission that is working.

Italian-Swedish diplomat Staffan de Mistura, the third UN envoy to take on the Syria file, has been walking a tightrope between Russia and Western countries who are sharply at odds over a peace settlement.

But success for an envoy is not just about ending violence. Containing a crisis or "keeping a lid" can also be considered a diplomatic achievement.

The UN's top envoys appointed for Libya, Syria or Yemen earn about $12,000 per month, but in exchange they agree to put their personal lives on hold, travel almost constantly and report to UN headquarters on their advances and setbacks.

Candidates to the posts must obtain approval from the five permanent council members - Britain, China, France, Russia and the United States -- and the parties themselves.

Mauritanian diplomat Ismail Ould Cheikh Ahmed, who is stepping down as Yemen envoy at the end of the month, fell out with Huthi rebels, which contributed to the failure of his mediation efforts.

Many envoys have thrown in the towel.

"My dream is to be the last special envoy for Libya," said Ghassan Salame in an interview with AFP late last year. "I do not want my role to drag on."

Some envoys have paid the ultimate price in the job. Brazilian diplomat Sergio Vieira de Mello, considered one of the UN's most gifted emissaries, was killed in a Baghdad attack in 2003.