Kavuma's body was dangling on a noose, while Nalubega's lay on the ground. 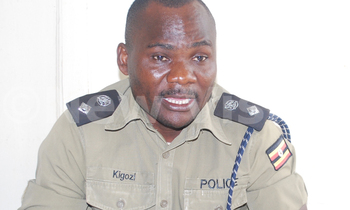 MASAKA - The Police in Masaka are investigating circumstances under which a man strangled his wife and hanged himself after.

The incident is reported to have happened on Friday. The deceased are Emmanuel Kavuma, 30, a brick layer and Florence Nalubega, 35, both residents of Kitabaazi village in Kimaanya-Kyabakuza division.

The dreadful episode took place indoors without their neigbours' knowledge.

It is only after a stench from the house drew the neighbours' attention to what was happening in the house. The occupants had not opened the house for three days.

Police was called to the scene on Sunday and broke the door.

Kavuma's body was dangling on a noose, while Nalubega's lay on the ground.

According to Lameck Kigozi, the Masaka regional Police spokesperson, the couple had separated for two weeks after a domestic dispute.

He said the counteraccusations of infidelity often dragged them into constant fighting.

After separation, Kavuma went to Nalubega's parents to resolve the matter, but they weren't forthcoming.

However, on Friday, Kavuma persuaded her to return to their home where he strangled her.

Police took the bodies to Masaka Regional Referral Hospital for a postmortem.

Kigozi appealed to the public to always report such grievances to the local council authorities or the Police Child and Family Protection Unit, before they run out of hand.

Early this year, a man hacked his wife after a breakup. The incident occurred at Kaserere village in Lwabakoba parish, Kagamba sub-county.

The suspect, Godfrey Mugumya, waylaid the Flora Namatovu, 32 and stabbed her several times for refusing to get back to him. She sustained multiple deep cuts on the back, neck and left hand. Her spinal code was also injured.

During 2017 Christmas season, a man killed his five-day-old twins and chopped off his wife's hand upon realising they were not his. The incident occurred at Bumogolo village in Byakabanda sub-county, Rakai district.

Asuman Ssekidde, a fisherman in Kalangala, had allegedly returned home to his wife, Regina Namatovu, 35, only to kill the children and Namatovu several times.