Of course there were concerns in the goalkeeping department, looking at the manner in which Benjamin Ochan rewarded Zambia with the third goal. 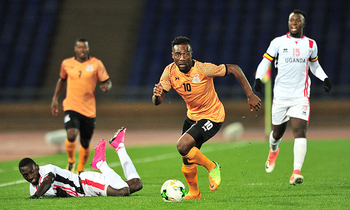 Cranes' Africa Nations Championship hopes of making it out of the group stages —for the first time in four appearances —could suffer a ‘still birth' unless Sebastien Desabre can fix the lack of stability in crucial areas of the team's structure.

When Cranes regrouped for a light session yesterday following their depressing 3-1 loss to Zambia on Sunday, the Frenchman must have embarked on special drills that would try to resolve the team's defensive frailties and limitations in attack.

Of course there were concerns in the goalkeeping department, looking at the manner in which Benjamin Ochan rewarded Zambia with the third goal. But that anxiety should be resolved with the return of first choice goalkeeper Ismail Watenga from suspension.

The biggest concern though lies in defence —where Cranes back-four were easily sliced by the Zambians and in attack —where lead striker Derrick Nsibambi and the support pair of Sadam Juma and Milton Karisa lacked a clear understanding of each other's movement.

Second half substitutes Mohammed Shaban and Nelson Senkatuka were even worse.

Goals win you games, but at the moment, there seems little to suggest that Nsibambi, Senkatuka or Shaban have all it takes to guarantee a couple or more in the subsequent games against Namibia on Thursday and Ivory Coast on January 22.

The alternative for the Frenchman is to identify a system that will allow the likes of Sadam, Mutyaba or Karisa the freedom to step forward with the odd goal. Desabre might be tempted to play Karisa closer to Nsibambi considering that he appeared to be Cranes' primary route to goal and yet he had to cover more ground to find the KCCA striker.

When he did in the 40th minute, the rewards were evident. His perfectly weighted ball into the box set up Nsibambi for a beautiful volley after Lazarous Kambore had given the Chipolopolo the lead two minutes earlier.

Kambore's finish and Augustine Mulenga's goal were too identical and proper evidence of the deep fault-lines in this team.

The selection of Bernard Muwanga and Timothy Awany in central defence is a curiosity. Central defence is to an extent the defining area of how a team sets out to play in a game. To earn a starter's jersey there, the basic requirements are intelligence and awareness.

The two defenders' poor positional sense shone a glaring light on their deficiencies in the same department at club level.

Ibrahim Kiyemba and Henry Katongole are the preferred defensive partnership at Villa, with Muwanga seated ahead of them, while Awany has churned out some comical performances for KCCA in the same position.

That, the two were considered the best in the Azam Uganda Premier League says much about the crisis at hand or the team's cloud of uncertainity in dealing with Namibia's hit-men Panduleni Nekundi and Hendrick Somaeb on Thursday.

The Brave Warriors thrive on applying consistent pressure with speed and power up the middle and Cranes' fortunes in Morocco might well depend on how Muwanga and Awany improve their chemistry.