On January 3, 2018, Oguli referred the matter to the Constitutional Court for interpretation, saying the High Court has no power to handle it. 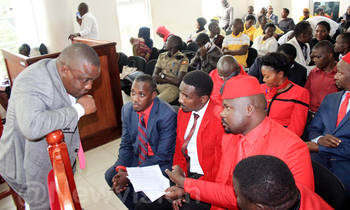 PIC: Some of the suspended Members of Parliament Gerald Karuhanga, Allan Ssewanyana and Mubarak Munyagwa consulting their lawyers Erias Lukwago during their case. (File photo)

KAMPALA - The six suspended MPs have vowed not to appeal against Justice Margret Oguli-Oumo's decision to refer their case to the Constitutional Court for interpretation.

Addressing journalists yesterday at the civil division of the High Court, the legislators, led by lawyer Erias Lukwago, said they cannot appeal against the judge's ruling because it was not an outright dismissal of the case.

"We are in a legal conundrum because we cannot appeal since there was no preliminary objection raised for the matter to be referred to the Constitutional Court. It was the judge who referred the matter, basing on her own opinion," Lukwago said Monday.

On January 3, 2018, Oguli referred the matter to the Constitutional Court for interpretation, saying the High Court has no power to handle it.

"I have perused through the file and it is my considered opinion that the matter should have been filed at the Constitutional Court. I am, therefore, compelled to find that the matter is beyond the jurisdiction of this court and I refer it to the said court," judge ruled.

However, the MPs protested the ruling, saying their matter was for judicial review of the Speaker's decision to suspend them without being heard.

According to Lukwago, they are ready to take on the Speaker of Parliament, Rebecca Kadaga, and the Attorney General even at the Constitutional Court.

"We are waiting for the judge to frame issues of the law that should be interpreted by the Constitutional Court.

"The MPs currently cannot execute their duties because they are not allowed access to their offices, yet they believe were illegally suspended," Lukwago noted.

Lukwago said the civil court assistant registrar, Joy Kabagye, disclosed to them that the file was forwarded to the Constitutional Court on January 5 and returned to the High Court due to lack of copies.

In their main case, the MPs want court to declare that the decision of the Speaker to suspend them from the House on December 18, as null and void.

The legislators claim that the said order of arbitrary suspension from the age-limit proceedings without consideration of the due process and all the tenets of natural justice is a violation of Article 28 and 42 of the Constitution.

The MPs says alledge that Kadaga invoked her powers to suspend them from the remainder of the session without regard to an equivocal provision of the Constitutions, yet the law on natural justice requires any person to be accorded a right to fair hearing.

The MPs also contend that they cannot, therefore, discharge their constitutional mandate of representation to the prejudice of their various constituencies.

Lukwago also revealed that they have finalised with the process of filing a complementary case challenging the amended article 102(b).