Nigeria to speed up repatriating migrants from Libya

Nigeria had already pledged to repatriate 250 migrants a week, following a CNN report on a slave trade targeting illegal migrants from west Africa in Libya. 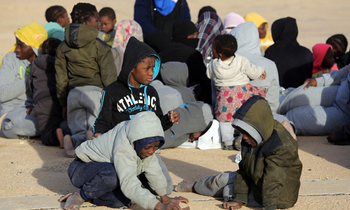 Nigeria is to speed up repatriating its citizens from Libya which has been accused of exploiting and ill-treating migrants, its foreign minister said in Tripoli on Saturday.

Geoffrey Onyeama told a news conference Nigeria was chartering two aircraft to repatriate over the next few days 800 of its citizens who wanted to go home.

Onyeama said he had visited two migrant detention centres in Libya and met a number of his compatriots.

"The reality is that a large number of these Nigerians here have suffered greatly and have gone through an extreme traumatic experience," he told reporters.

"The main objective is to get these Nigerians back home as quickly as possible."

Onyeama admitted there had been difficulties in identifying the number of Nigerians in Libya, as many were undocumented or in detention centres not controlled by the authorities.

Nigeria had already pledged to repatriate 250 migrants a week, following a CNN report on a slave trade targeting illegal migrants from west Africa in Libya.

Nigerians make up the majority of undocumented migrants trying to make the treacherous crossing via the Mediterranean Sea to Europe.

Almost 1,300 Nigerian migrants were brought home from Libya last November -- nearly twice as many as in the previous month, the head of Nigeria's National Emergency Management Agency said in December.