"The protest set for Tuesday will proceed," Augustin Kabuya, the spokesman for the opposition Union for Democracy and Social Progress told AFP. 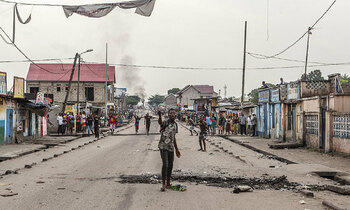 The opposition in DR Congo ramped up pressure on President Joseph Kabila to quit, calling for street protests on Tuesday.

Tensions have been mounting over Kabila's refusal to step down. He has been in power since 2001 and the prolonged rule has led to sweeping protests and a bloody crackdown.

The opposition has said it wants a transition "without Kabila" in the Democratic Republic of Congo after December 31, in line with a peace agreement reached on New Year's Eve last year.

"The protest set for Tuesday will proceed," Augustin Kabuya, the spokesman for the opposition Union for Democracy and Social Progress told AFP.

"The aim of this march is to call for elections by the end of the year as outlined in the New Year's Eve accord," he said.

Kabila's government has pushed back the election by a year to December 23, 2018. The plan has the reluctant support of western nations, which insist that the new deadline be firmly kept and that the government uphold the right to protest and of freedom of assembly.

On October 30, police fired tear gas to disperse opposition rallies across the sprawling country as hundreds defied a ban and held marches to voice their anger.

Kabila took office after his father Laurent was assassinated in 2001 at the height of the Second Congo War.

He was confirmed as leader in 2006 during the first free elections since independence, and re-elected for a second term in 2011 in a vote marred by accusations of fraud.