Lwakataka to compete at NRC 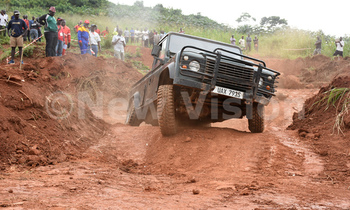 Vicent Achidri powers his Land Rover during the 4x4 championship at Kagga Zion Estate in Wakiso district. Photo by Johnson Were

Rally driver Ponsiano Lwakataka is back in the cockpit and fans should expect him to compete for the National Rally Championship (NRC) crown next year.

Lwakataka and his navigator George ssemakula assured the fans on Sunday at Kagga Village in Zion Estate Wakiso district after the final round of the national autocross championship in which they finished second behind winner Hassan Alwi.

"Today we finished second, but we were testing our car and we shall be back fully next year to fight for the NRC," Ssemakula stated.

Omar won the last round of the Buggy championship category while Alwi won the autocross category during the events at Ssisa Race track Kagga in Zion Estate in Wakiso district.

Omar posted 15.5minutes to beat Blick who finished second after posting a time of 17.43minutes and Shafik Seki who finished third with a time of 20.09minutes.

Omar 14 years-old said that his winning the buggy category was a motivation for him to stay in motorsport and go for higher targets including winning the regional championship.

"I am happy and excited that I have won and this is a motivation to me to aim for now regional trophy next season and more others," Omar Stated.

"This has also motivated me ahead of the FIM Central Africa (FIM CAC) motocross championship next weekend (this weekend) in Nairobi," Omar stated.

Omar this year won all the three national buggy championships to emerge champion.

Alwi who also won the last round emerged the 2017 Autocross champion after collecting a total of 30points.

He beat challenger Unisan Bakunda who collected a total of 26points in the season.