The summit comes just two weeks after US network CNN aired footage of black Africans sold as slaves in Libya, sparking outrage from political leaders and street protests in African and European capitals. 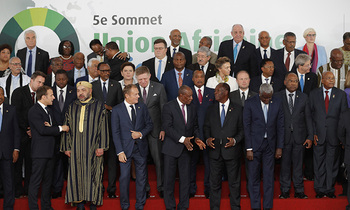 "I would like to appeal to our sense of responsibility to take all urgent measures to put an end to that practice, which belongs to another age," he said, opening the gathering of 55 African Union and 28 European Union nations in Ivory Coast's economic capital.

An emergency meeting on the issue was scheduled for Wednesday night, bringing together France, Niger, Chad and Morocco as well as UN, EU and AU officials, the office of French President Emmanuel Macron said.

Macron has proposed in particular a crackdown on traffickers, efforts to break up smuggling rings and the evacuation of people in Libya migrant camps who are at risk of falling into slave traders' hands, his office said.

The summit comes just two weeks after US network CNN aired footage of black Africans sold as slaves in Libya, sparking outrage from political leaders and street protests in African and European capitals.

African Union and other critics have accused the EU of creating conditions for the slave trade as well as rape and torture of migrants by encouraging Libya's UN-backed Government of National Accord (GNA) to detain migrants and stop them from coming to Europe.

The EU has been desperate to ease the worst migration crisis since World War II, with more than 1.5 million migrants entering the bloc since 2015.

In his speech to the summit, European Council President Donald Tusk acknowledged the "horrifying" treatment of young Africans.

But he also warned against starting "a blame game" and called for cooperation to fight criminals.

Amnesty International accused Europe of being "complicit" in the abuses by funding, training and instructing the Libyans to detain migrants.

The group instead called on the African leaders to urge Europe to open more safe and legal migrant routes to Europe.

But Ghana's president, Nana Akufo-Addo, in a statement before he headed to Abidjan, also implicitly criticised Libya.

The "gross and scandalous" auctions made "mockeries of the alleged solidarity of African nations grouped in the African Union, of which Libya is a member," he said.

Separately, Nigerian President Muhammadu Buhari, in a statement issued by his office, said it was appalling that his compatriots were being sold "like goats".

He vowed to repatriate and rehabilitate Nigerians stranded in Libya, and reduce the numbers heading for Europe illegally via North Africa.

The EU said in a statement that it had agreed with AU and UN partners to set up a task force to protect migrants and refugees in Libya and along other routes.

EU officials said the migrant influx, which has deepened political divisions across the EU, as well as frequent Islamist attacks in Europe have been a wake-up call to tackle the root causes of why people leave their homes.

The EU has already set up multi-billion-euro funds to promote Africa's economic development while deepening counter-terrorism cooperation with African countries where Islamist militant groups are spreading.

The summit, due to wind up on Thursday, is intended to focus on providing stability and long-term economic growth for a continent facing a population crunch.

In his speech, European Commission chief Jean-Claude Juncker called for a "partnership of equals" and underlined EU plans for 44 billion euros ($52.2 billion) in investment for Africa until 2020.

EU leaders warn there is little time to find ways to meet the needs of an African population set to more than double by 2050 to around 2.4 billion people.

Without fast-tracked development, millions could flee to Europe or turn to radical Islamist groups, EU and African leaders say.

Aready EU officials are warning that Islamic State group fighters are fleeing from the collapsing caliphate in Iraq and Syria to Libya and other parts of North Africa.