As bulldozers tore through the earth, they stumbled on human bones -- the remains of 325 people, most of them in mass graves, mainly children with an average age of 12 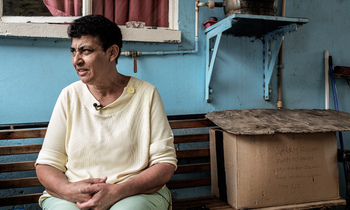 Rupert's Valley resident Deborah Fowler looks on as she recalls her parents' stories on finding bones while walking through the valley on October 19, at Rupert's valley in the British Overseas Territory of Saint Helena. AFP photo

The only pointer of what lies inside the stone storehouse within the grounds of the prison is a printed note pasted to an old grey door.

"This is to mark the temporary resting place of 325 liberated African slaves brought to St. Helena against their will. They now wait in this room for their final resting place," it reads.

Candles and a bouquet of wilting white arum lilies sit in front of the wooden door on the remote British island of St. Helena in the middle of the South Atlantic Ocean.

Nine years ago, the skeletons of the former slaves were discovered during the construction of the island's first airport.

Since then the remains have been kept in cardboard boxes in the prison storehouse.

Every Sunday, Annina Van Neel Hayes, 30, an environmentalist born in Namibia, pays homage to the forgotten dead by laying flowers in front of the padlocked door.

It was she and her friends who put up the epitaph.

"Still 10 years later, nothing is being done," she said, suggesting that proper reburial of the former slaves' remains "has never been a priority of St. Helena government".

After abolishing its slave trade in 1807, Britain intercepted mainly Portuguese slave ships sailing near St. Helena, which lay on the notorious slave-trading route from Africa to America and the Caribbean.

Many died from dysentery and smallpox.

An estimated 8,000 are buried in Rupert's Valley in the north of the island, said archaeologist Andrew Pearson.

"Because you have the mid-Atlantic stopping point, it is unique and hugely important," he said. "Nowhere else could have this -- people straight off slave ships."

It is in Rupert's Valley that a road was built several years ago to bring in imported construction equipment for the island's first airport.

As bulldozers tore through the earth, they stumbled on human bones -- the remains of 325 people, most of them in mass graves, mainly children with an average age of 12.

"Rupert is littered with remains from that period," said airport manager Janet Lawrence. There were only two known graveyards and the rest were unmarked.

Previously other bones had been unearthed during the construction of a power station in the 1980s.

"My father told me stories about chains and slaves," recalls Alonzo Henry, 36.

"We used to get a lot of power cuts and people used to say it was because the power station had been built on the graves".

His aunt Deborah Fowler, 53, remembers finding bones when they were looking for food for goats.

"As kids, we thought it was animal bones," she said.

From her window, she can see a low stone building that was once the slaves' hospital, and is now used for fish processing.

The remains have forced St. Helena's residents to confront the island's dark past and to wrestle with a dilemma of how to balance development with giving due respect to the burial sites.

"When we were growing up, we were told about Napoleon (who died in exile on the island), the Boers (war prisoners), but there was barely any information about the slaves," said jeweller Giselle Richards, 32.

In contrast to the slaves' fate, Napoleon was honoured with a tomb -- though his body was taken back to France -- while the Boer prisoners lie in neat plots in a hillside graveyard.

The decision to temporarily hold the remains of the liberated slaves in a storeroom at Jamestown jail has disconcerted some.

Jeremy Harris, director of the local National Trust conservation group, admits he forced open a lock and broke in after being repeatedly denied permission to inspect the building.

He is now supporting a campaign for the bones to be moved and ceremonially reinterred.

"The symbolic fact that these people are kept in an extension of the prison is inappropriate," he said.

Island officials argue that the thick walls of the old prison keep the bones at a constant temperature.

And last month a group of local experts was commissioned to make recommendations within six months on the reburial of the remains.

For Alonzo Henry, who believes he may be a descendant of the slaves, the discovery of the bodies during the airport's construction was deeply ironic.

"With the airport, we are thinking about our future and yet we are rediscovering our past," he said.