Turkey tells US it needs no 'permission' for arrests 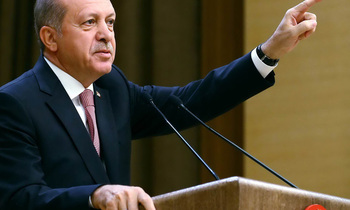 Turkish Prime Minister Binali Yildirim on Tuesday rejected American criticism over the arrest of US consulate staffers, saying Ankara did not need Washington's approval as a diplomatic spat worsened.

A row between the two NATO allies erupted last week when Turkey jailed an employee of the American consulate in Istanbul, as part of an investigation into last year's failed coup.

"Are we supposed to ask for permission from the gentlemen?" Yildirim told a cheering crowd of supporters in parliament.

The consulate employee, a Turkish citizen, was remanded in custody over accusations of links to the movement led by US-based Muslim preacher Fethullah Gulen, whom Ankara blames for masterminding the July 2016 coup bid.

The staffer has been formally charged with espionage and seeking to overthrow the Turkish government, accusations rejected by the US embassy as "wholly without merit."

The US responded to the arrest by banning non-immigrant visas from Turkey. Ankara hit back with its own visa suspension, while urging Washington to reverse its move.

"It is very inappropriate to dare to punish citizens," Yildirim said. "It is behaviour that does not fit a country like the US."

Yildirim accused Washington of harbouring Gulen on its territory, as he criticised the US' arrest of a senior executive of Turkey's largest state-owned bank.

"Did you ask us when you threw the deputy chief executive of our official bank behind bars?" the premier said.

Mehmet Hakan Atilla, deputy chief executive officer at Halk Bank, was arrested in March in the US on charges of conspiring to evade sanctions on Iran.

Atilla is accused of conspiring with an Iranian-Turkish businessman Reza Zarrab to launder money through the US financial system on behalf of Iran.

"Is this fitting of an alliance, of a friendship?" Yildirim asked.

He urged America to apply "common sense" and said the row must be solved as soon as possible.

Pro-government media on Tuesday led on the diplomatic spat, with Yeni Safak daily describing the US as "not an ally but an enemy" in large font on its front page.