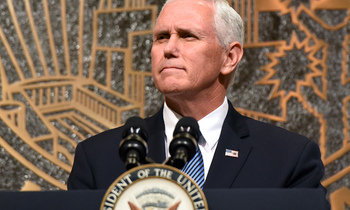 US Vice-President Mike Pence walked out of an NFL game Sunday after some players kneeled for the national anthem, the latest twist in a running saga over the controversial protests against racial injustice.

Pence said that he departed after seeing players kneel during a rendition of "The Star-Spangled Banner" before his home team the Indianapolis Colts hosted the San Francisco 49ers.

"I left today's Colts game because President (Donald) Trump and I will not dignify any event that disrespects our soldiers, our Flag, or our National Anthem," Pence wrote on Twitter.

While Colts players stood arm-in-arm for the anthem, more than 20 San Francisco players took a knee.

It was a less organised gesture than the 49ers' demonstration last week, when 30 players knelt with hands on hearts while teammates stood behind them.

But it should have come as little shock to Pence, an Indiana native who had tweeted his photo in Colts cap and shirt before the game.

"While everyone is entitled to their own opinions, I do not think it is too much to ask NFL players to respect the Flag and our National Anthem," Pence tweeted.

"I stand with President Trump, I stand with our soldiers and I will always stand for our Flag and our National Anthem."

Trump weighed in later via Twitter, taking credit for the departure of Pence and his wife from the stadium.

"I asked @VP Pence to leave stadium if any players kneeled, disrespecting our country. I am proud of him and @SecondLady Karen," he said.

San Francisco safety Eric Reid, one of the first players to embrace the anthem protest after it was initiated by former 49ers quarterback Colin Kaepernick last year, said Pence's walkout looked like a publicity stunt.

"With the information I have, the last time he went to a Colts game was three years ago, so this looks like a PR stunt to me," said Reid, noting that the picture Pence had tweeted of himself and his wife in Colts apparel appeared to be the same as one taken at a game three years ago.

The vice-president also tweeted a picture of himself, clad in a button-down shirt and blazer, and his wife standing for the anthem on Sunday.

"He knew our team has had the most players protest. He knew we were probably going to do it again," Reid said.

"And so this is what systemic oppression looks like, a man with power comes to the game, tweets a couple things out and leaves the game with an attempt to thwart our efforts."

Trump angered NFL stars, team owners and league officials last month in describing players who refused to stand for the anthem as "sons of bitches."

His comments sparked a wave of demonstrations around the league, with many players and some team owners locking arms in a sign of unity.

The NFL Players Association issued a statement on Sunday reiterating its support of players' rights to express their views.

"We should not stifle these discussions and cannot allow our rights to become subservient to the very opinions our Constitution protects," the union said.

Dallas Cowboys owner Jerry Jones also weighed in on the issue, threatening to bench players who do not stand for the anthem.

"If we are disrespecting the flag, then we will not play. Period," Jones said after the Cowboys' 35-31 loss to the Green Bay Packers in Dallas.

Pence, who flew to Indianapolis from Las Vegas and was scheduled to head west to Los Angeles, came in for criticism from outside the sports world for his abbreviated appearance at the game.

"After all the scandals involving unnecessarily expensive travel by cabinet secretaries, how much taxpayer money was wasted on this stunt?" Congressman Adam Schiff, a Democrat from California, said in a tweet.