The demonstration started last week after the arrest of Babu Owino, a former student body president who recently won a seat in parliament as a staunch supporter of opposition leader Raila Odinga. 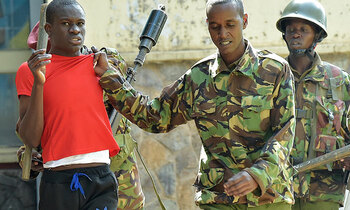 PIC: Kenyan anti-riot police arrest a University of Nairobi student during a protest in Nairobi on September 28. (AFP)

Campuses at one of Kenya's largest universities have been closed after demonstrations broke out ahead of the country's tense presidential election re-run, a university official said.

Students at the University of Nairobi were ordered to vacate their dormitories on short notice after overnight protests that went into Tuesday morning, corporate affairs director John Orindi told AFP.

"We've closed the university due to the directives of administration," he said.

The demonstration started last week after the arrest of Babu Owino, a former student body president who recently won a seat in parliament as a staunch supporter of opposition leader Raila Odinga.

Odinga will face off against President Uhuru Kenyatta in polls scheduled for October 26 after the Supreme Court ordered a do-over of last August's presidential election, citing widespread "illegalities and irregularities".

Tension has risen in Kenya since the ruling, with at least two politicians arrested on hate speech charges amid disagreements between Odinga's National Super Alliance (NASA) and Kenyatta's Jubilee Party over the terms of the second election.

Odinga is calling for an overhaul of the election body and the sacking of some of its senior officials, moves that the Jubilee government has ruled out.

Owino was arrested last week and charged with subversion after insulting Kenyatta at a rally of Odinga supporters.

His detention led students to block roads at one of the university campuses and clash with riot police, though Orindi said outsiders may have also been involved in the skirmishes.

The unrest restarted on Monday night and flared up again the following morning, prompting the closure that Orindi said would be indefinite.

Students who came to campus after 9:00 am were barred from entering, and many complained the shutdown would derail their studies.

"Why are they closing the school? Is this the best way they could manage this? This means we can't do our exams," said Ivy, an art student.