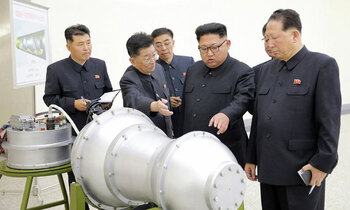 A shallow 3.5-magnitude earthquake hit North Korea near the country's nuclear test site Saturday, US seismologists said, in what China's seismic service said was a "suspected explosion", but Seoul deemed a "natural earthquake".

The United States Geological Survey (USGS) said the quake struck around 20km away from the North's nuclear test site, where earlier this month it detonated its sixth and largest device, which it claimed to be a hydrogen bomb capable of being launched onto a missile.

"This event occurred in the area of the previous North Korean Nuclear tests. We cannot conclusively confirm at this time the nature (natural or human-made) of the event. The depth is poorly constrained and has been held to 5km by the seismologist," USGS said in a statement.

Regional experts differed on their analysis of the tremor, with China's China Earthquake Network Centre (CENC) service calling it a "suspected explosion", while Seoul's Korea Meteorological Agency (KMA) judged it a "natural quake".

"There is no possibility that this could be an artificial quake," Yonhap news agency quoted a KMA official as saying.

The North's last test, on September 3, was the country's most powerful detonation, triggering a much stronger 6.3-magnitude quake that was felt across the border in China.

A second tremor soon after that test was possibly caused by a "cave-in", CENC said at the time.

This week marked a new level of acrimony in a blistering war of words between Kim and Trump, with the US leader using his maiden speech at the United Nations to warn that Washington would "totally destroy" the North if the US or its allies were threatened.

The North, which says it needs nuclear weapons to protect itself against the threat of invasion by a hostile US, responded on Friday with a rare personal rebuke from Kim, who called Trump "mentally deranged" and a "dotard" and threatened the "highest level of hard-line countermeasure in history".

Russia and China have both appealed for an end to the escalating rhetoric between Washington and Pyongyang.

But on the fringes of the UN meeting this week, North Korean Foreign Minister Ri Yong-ho upped the tensions further, telling reporters Pyongyang might now consider detonating a hydrogen bomb outside its territory.

Monitoring groups estimate that the nuclear test conducted in North Korea earlier this month had a yield of 250 kilotons, which is 16 times the size of the US bomb that destroyed Hiroshima in 1945.

Hydrogen bombs, or H-bombs, are thermonuclear weapons far more powerful than ordinary fission-based atomic bombs, and use a nuclear blast to generate the intense temperatures required for fusion to take place.