"The money we collect at the district level goes to the Central Bank, but it delays to be sent back to the local governments ..." 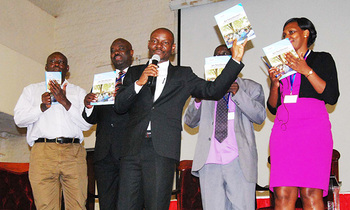 District chairpersons under their umbrella organisation, the Uganda Local Government Association (ULGA), have proposed an amendment into the constitution to allow districts to independently levy taxes without the watching eye of the Uganda Revenue Authority.

The district leaders argue that government should also change the legal remittance of collected revenue to the consolidated fund so that they can get the powers to allocate the tax levies without the big brother approval of the central government.

Speaking at the annual national conference on economic, social and cultural rights, Gulu district chairperson, Martin Ojara Mapenduzi, who is also the vice chairperson of ULGA, said the 12.9% budgetary allocation to districts from the over sh24 trillion national budget is like a drop in the ocean.

"There is a serious need for frank discussions on the failure of Local Governments. 12.9% of the national budget is given to local governments. In fact, of the 12.9%, only 9% reaches the ground.  As long as the local governments continue to depend on the centre for their revenue, we shall not achieve much. We therefore, propose that we amend the law to allow local governments to collect their own revenue," Ojara said yesterday at the conference, which was organized by Global Rights Alert (GRA) and Initiative for Social and Economic Rights (ISER) in conjunction with government at Makerere University.

Ojara said the other key area that must be addressed is the newly introduced Integrated Financial Management System (IFMS), which he says makes it hard for the districts to access the money released by the central government.

"The money we collect at the district level goes to the Central Bank, but it delays to be sent back to the local governments because of the new IFMS. That needs to be carefully looked at because the delay to release funds might be influenced by the intention to defraud government," he said.

However, some scholars in decentralisation have proposed that local governments should look at creativity rather than depending on central government and revenue collections to enhance development.

According to Prof. Jaap de Vissser from the University Western Cape, who gave a keynote address on devolution and decentralization in Africa, the problem of limited creativity in local governments has been complicated by the proliferation of districts.

"There are doubts on whether Uganda can afford these many districts," he said.

Winfred Nagabiirwe, the executive director of Global Alert Uganda, said by creating districts on the basis of political demands, the question development and service delivery to the local people has been minimized because district are negotiating from  a weak position.

Yet for Godber Tumushabe, the director of Great Lakes Institute for Strategic Studies, what has failed is not decentralisation but leadership. Tumushabe has proposed that a regional system be adopted in favour of districts if service delivery for the people can be enhanced.

"The problem is not financial, legal of political. What has failed is not decentralization, it is leadership," he said, calling for a reconfiguration of the current district structure into a regional government system.

According to the creation of district roadmap that government tabled in Parliament, by 2019, there will be 134 districts up from the current 112.

A report released yesterday by ISER's executive director, Salima Namusobya, indicates that mere shifting of the responsibility base is not an end but a process, which should be enhanced by the central government so that lower government are empowered to work on their issues.