He has already selected a team of 12 players 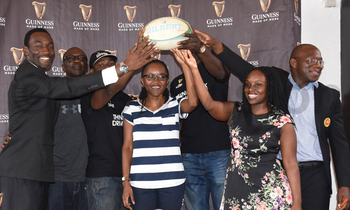 Coach Tolbert Onyango believes the national rugby 7s team will be in unchartered territory when the Rugby Africa Sevens tournament kicks off on October 6th in Kampala.

Uganda for the first time in rugby history will host an international tournament of this calibre and with it comes a lot of expectations from both the players and the fans alike.

"The pressure that comes with being the tournament's top seed and the pressure to perform at your best for the home fans is something new for the boys," Onyango said.

"The fact that Legends Kampala Rugby Club will host the tournament is great because it is home to one of the country's oldest rugby teams which is very special and sentimental as we seek to defend the title," Onyango added.

He has already selected a team of 12 with James Ijongat returning and teenager Desire Ayena also receiving his first Sevens call-up.

"I have a group of 12 players that know each other well, they all have played together before apart from one new addition," he explained.

"This team has the youth, experience and hunger, the boys are poised enough to deliver and ensure we win it," he added.

Onyango also highlighted the opportunity his players have to announce themselves to the global stage.

"To most of them it is an opportunity at exposure and who knows a few scouts could be watching so I know they will perform their best."

Most of these players have been part of the team in this journey that has seen them invited to the Dubai and Cape Town Sevens circuits and most importantly a chance at the Hong Kong qualifiers.

The Rugby Cranes will travel to Germany for the DHL Oktoberfest 7's as they prepare for the tournament in Kampala.

They will be without Lawrence Ssebuliba who is on the reserve list where he is joined by Joseph Aredo, Kevin Keremundu, Byron Oketayot, Solomon Okia and Ivan Magomu.

Uganda has not played many warm up games leading up to the Rugby Africa 7s so the Oktoberfest tournament in Munich comes at a welcome time just a week before the Africa 7s.