President Museveni has been one of the key leaders pushing for reforms at the world body. 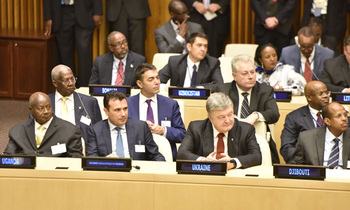 President Museveni (L) and other world leaders attending a conference on political declaration on UN reforms which was addressed by  President Donald Trump (not in picture) of the United States and held at the ECOSOC Chambers at the UN.

"Trump is pushing for the United Nations to be efficient in its peace keeping processes, be more focused and have more achievable targets, not spend time on procedures but on substance and manpower," he said shortly after a closed door meeting for world leaders in ECOSOC Hall, at the United Nations Headquarters.

"We support the reforms because this is what we have been talking about all along. There are situations where there is a strong UN presence but alongside, there is death and destruction like in Eastern DR Congo," he said.

"Uganda is pushing for Africa's case for the reform of the membership of the security council which is currently monopolized. Africa has no permanent members on the five-member council. Our argument was for Africa to have at least two members," he said.

President Trump is seeking global support for reforming the world body as he hosts leaders at the United Nations Headquarters a day before he makes his inaugural address to the 193-member organization.

According to reports President Trump criticized the United Nations for bloated bureaucracy and mismanagement in his meeting today, calling for "truly bold reforms" so it could be a greater force for world peace.

"In recent years the United Nations has not reached its full potential because of bureaucracy and mismanagement, while the United Nations on a regular budget has increased by 140 percent and its staff has more than doubled since 2000. The United Nations must hold every level of management accountable, protect whistleblowers and focus on results rather than on process," Trump said.

"I am confident that if we work together and champion truly bold reforms the United Nations will emerge as a stronger, more effective, more just and greater force for peace and harmony in the world," Trump said in his first remarks at the U.N. in New York since his inauguration as president in January.

Over 120 countries were invited to the reform meeting during which Trump spoke for just four minutes.

According to reports, the reform package championed by Antonio Guterres and vigorously supported by the US Permanent Representative to the UN Nikki Haley would make the United Nations a more streamlined bureaucracy better able to deliver tangible results to the people it serves.

The reforms are a suite of bureaucratic shifts and changes in the UN's organizational chart. The net effect of these reforms is to increase the power of the Office of the Secretary General-that is, give him more ability to hire and fire personnel and more broadly shape the UN bureaucracy.