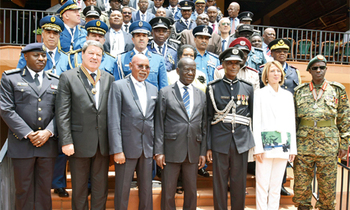 Celebrated African writer Chinua Achebe in his book Things Fall Apart, quotes an African proverb: "Eneke the bird says that since men have learned to shoot without missing, he has learned to fly without perching."

That is perhaps the classic philosophy behind the formation of the Eastern Africa Police Chiefs Co-operation Organisation (EAPCCO).

This is an umbrella group for Police principals, constituted in Kampala in 1998 as a regional practical response to the need to join police efforts against transnational and organised crime.

The Kenyan capital Nairobi hosts the Eastern Africa sub-regional permanent secretariat. This year's meeting hosted by Uganda, is under the theme Enhancing Co-operation and Innovation in Combating Transnational Organised and Emerging Crimes.

The region is fighting transnational crime that has taken on a new dimension, with reverberating effect of immense proportions.

The Horn of Africa and part of the Great Lakes region experienced subversive activities and insecurity, such as the armed negative forces, genocide perpetrators roaming around, proliferation of small arms and light weapons, disasters, terrorism and piracy.

The importance of the organisation is enshrined in its objectives, as stipulated in Article 3 of its constitution. It harmonises, promotes, strengthen and perpetuates co-operation and joint strategies for the management of all forms of cross-border and related crimes with regional implications.

EAPCCO prepares and disseminates relevant information on criminal activities and mutual assistance as may be necessary in controlling crime within the region, for the benefit of all member states.

It examines training needs of members' Police forces in particular, specialised training areas, such as drug enforcement, stolen vehicles, stolen artifacts, economic and financial crime, illicit traffic in weapons, violent crime, including terrorism and armed attacks and any other areas as may be identified.

It also co-ordinates training programmes. The organisation identifies training potential within the sub-region for the benefit of member Police forces and ensures efficient operation and management of criminal records and effective joint monitoring of crossborder crime, taking full advantage of the relevant facilities available through Interpol. CLICK HERE FOR MORE ON THIS STORY

Public involvement in the fight against crime is one of the successful tools of promoting safety, law and order in the communities.

This has been demonstrated by the Uganda Police Force model of local engagement in fighting and detecting crime in their areas.

Through community policing, the Police spokesperson, Asan Kasingye, says they have reduced the rate of crime countrywide.

Community policing is the administration and enforcement of laws and regulations and maintenance of public order with the engagement of local communities.

"It is a partnership between the members of the public and the Police to confront crime in society," Kasingye says.

He notes that community policing is based on the belief that the Police alone cannot guarantee sustainable security without public participation and support.

Kasingye says the idea rests on the belief that law-abiding people in the community deserve input in policing processes. "Modern policing worldwide is experiencing a paradigm shift from the traditional (reactive) policing to a proactive approach. This has necessitated the introduction of more effective and sustainable means of promoting public safety through community policing," he adds.

The basis for community policing in Uganda is both legal and doctrinal. Kasingye explains that Article 212(d) of the Constitution emphasises cooperation between the police and the public and other security organs.

It is also the duty of the citizen to co-operate with agencies in the keeping of law and order. The concept of community policing, Kasingye says, is now considered secondgeneration policing.

"The new paradigm or doctrine in Police work requires the integration of traditional Police duties and functions into life and activities of communities in the fight against crime, which we are doing as the Uganda Police Force. Community policing is what good cops do." CLICK HERE FOR MORE ON THIS STORY

Why DRC co-operation is key for Police

The rise in sophisticated crime across East Africa remains a puzzle for Police chiefs in the region because of its cross-border nature.

Cases of insecurity, human trafficking and car theft have been top on the agenda during interactions among top Police bosses in the region in the recent years.

In 1998, at the height of insurgency in the region, several countries came together to form the Eastern Africa Police Chiefs Co-operation Organisation (EAPCCO). EAPCCO was founded as a regional response to fight transnational and organised crime.

Through joint efforts, the member countries have narrowed in on key suspects by sharing intelligence and clues. 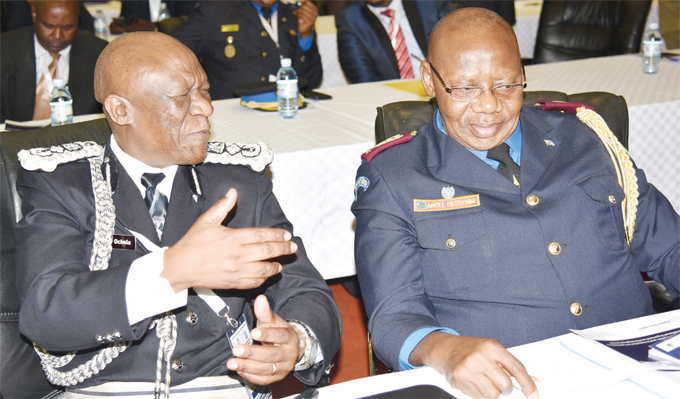 As the region draws closer in the spirit of regional integration, Police chiefs keep searching for clues on how to combat cross-border crime and boost free movement of people, goods and services across the region Member states make financial contributions to cover the operational costs of the organisation and benefit from resources of global agencies, including Interpol.

In dealing with some of the most overlooked security challenges in the region, the organisation has recorded major successes along the difficult security landscape, for instance, through the Mifugo project (mifugo is the Kiswahili word for livestock) which focuses on combating the use of small arms from a cattle-rustling perspective and related criminal activities.

However, even with the successes, huge challenges remain and may seem insurmountable if not accorded due zeal and determination. The people across the countries are closely connected and the borders are porous.

The complexities of tackling certain crimes, such as terrorism, drug and human trafficking have drawn security chiefs much closer than ever before. CLICK HERE FOR MORE ON THIS STORY