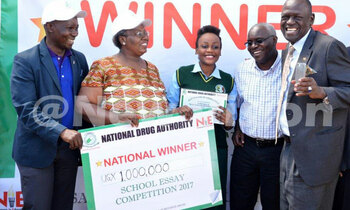 Drug and substance abuse is one of the biggest challenges of our time, not only in schools, but the whole country, according Dr Sheila Ndyanabangi, the officer in charge of mental health at the health ministry.

"Children of ministers, doctors, pastors, peasants are all suffering of drug abuse. Those who have been addicted and failed to be rehabilitated are wasting away. Promising students who pick up the habit from peers forever lose their way. The highly educated man who gets hooked on drugs and wastes away," Ndyanabangi said.

"Drug abuse is extremely dangerous. It destroys lives and it breaks families The best way to fight it is through prevention," she added.

She was speaking during an awards ceremony for the Winners of the 2017 School's Essay Competition, organised by the National Drug Authority (NDA) and the New Vision, under the Newspaper in Education (NiE) project.

Ndyanabangi, who was the chief guest during the function held at the New Vision offices in Kampala, said she would rather treat 20 people with mental illness than one who suffers from  drug abuse.

"Treatment for drug addicts is very hard, and expensive. What the New Vision and NDA is doing is very important, I am very excited," Ndyanabangi she said.

Rebecca Edith Namakula from Seeta Parents' Primary School, emerged overall winner of the primary school category. She walked away with a cash prize of sh1m.

First runners up and second runners up in the overall category were awarded sh700,000 and sh500,000 each, respectively.

Regional category winners were also awarded certificates and a cash prize of sh500,000 each.

Each region had two winners, one for primary and the other for secondary level.

Robert Kabushenga, the Vision Group Chief executive officer, commended NDA for partnering with the New Vision to fight substance abuse and for holding the competition.

"With drugs, you become totally useless. If you engage in drug abuse, you will waste away. If you want to know how dangerous it is. Go and visit rehabilitation centres. It is terrible," Kabushenga said.

The Vision Group CEO noted that the situation regarding drug abuse is worse these days because children are introduced to it. He, however, expressed optimism that there is so much information out there on how to fight in.

"When we were in school in the 1980's, we had no such information regarding drug abuse, but you are lucky you have this information," Kabushenga said.

Barbara Kaija, the Editor in Chief of  Vision Group, said NiE offers an opportunity for children to learn in a simple manner, through reading.

"Children who read newspapers learn fast and perform better than those who do not read. Through this NiE project we have an army of children who know it is wrong to abuse drugs. They have learnt a lot and we know millions out their will learn a lot from the newspapers," Kaija said.

Dr Medard Bitekyerezo, the NDA board chairman, said he is thrilled for the partnership between New Vision and NDA that is aimed at curbing the big challenge of drug abuse.

"We are reaching young children in schools so that drug dealers do not find market for their substance. When these children and parents are informed about the dangers of drug abuse, they get to know and will avoid them," Bitekerezo said.

"NDA's decision to support school essay competition demonstrates corporate social responsibility of engaging a key audience of our population on how to overcome challenge of dug and substance abuse in their learning environment," Ssekyana says.