5.6 million Floridians ordered to evacuate as Irma closes in 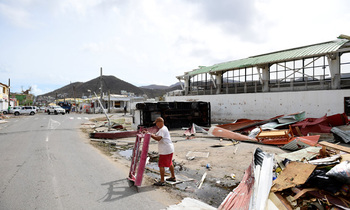 An overturned truck and scattered debris following passage of Hurricane Irma on the French island of Saint-Martin. The storm is now headed to the US

Florida has ordered 5.6 million people to evacuate as massive Hurricane Irma menaces the southeastern US state, according to its Division of Emergency Management.

Irma regained strength as a Category five storm late yesterday as it made landfall on the Camaguey Archipelago of Cuba and is now swirling about 275 440km away from Miami packing maximum sustained winds of 160 miles per hour.

Irma is expected to strike the Florida Keys late today and tomorrow before moving inland, according to the National Hurricane Centre and many residents have joined a mass exodus amid increasingly dire warnings to leave.

As it roared across the Caribbean the monster storm claimed at least 19 lives, devastating a series of tiny islands like Saint Barthelemy and Saint Martin, where 60% of homes were wrecked and looting broke out before slamming into the Virgin Islands and Puerto Rico.

Warning that Irma would be worse than Hurricane Andrew, which killed 65 people in 1992, Florida's governor Rick Scott had said all of the state's 20.6 million inhabitants should be prepared to evacuate.