Joyous celebrations erupted outside the court and in Nairobi slums 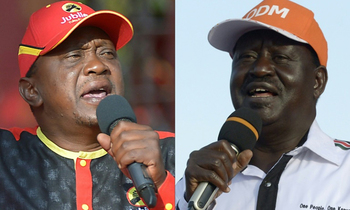 Kenya's Supreme Court on Friday ordered a new presidential election after annulling the results of last month's poll in a shock decision in favour of the opposition.

Joyous celebrations erupted outside the court and in Nairobi slums after the second term victory of President Uhuru Kenyatta was declared "invalid, null and void".

Veteran opposition leader Raila Odinga, 72, for whom the court decision represented a rare victory in his political career, hailed the ruling as historic.

He said it was the first time a presidential result had been overturned in Africa.

Chief Justice David Maraga said a majority decision by the panel of seven judges, with two dissenting, found that Kenyatta "was not validly elected", rendering the result "invalid, null and void".

Maraga said the election commission (IEBC) had "failed, neglected or refused to conduct the presidential election in a manner consistent with the dictates of the constitution".

It was the third time in a row that Odinga cried foul, claiming he was cheated out of rightful victory after losing elections in 2007 and 2013.

The disputed 2007 election led to politically-motivated ethnic violence in which over 1,100 people were killed. In 2013, Odinga took his grievances to court and lost.

After the August 8 poll, Odinga and his National Super Alliance (NASA) charged that the transmission of electronic results to a national tallying centre was riddled with irregularities.

Angry opposition protests left at least 21 people dead, and while Odinga initially refused to take their case to court they changed their mind, saying they wanted the truth to come out even if they believed they had no hope of winning.

However, in a stunning turn of events, the Supreme Court agreed with NASA.

Maraga said there had been "irregularities and illegalities", notably in the transmission of election results.

He said this had compromised the "integrity of the entire presidential election".

And he ordered that a new election be held within 60 days.

"We are ready for elections but we don't have confidence" in the electoral commission (IEBC), said Odinga.

"Those commissioners must go," he said.

"Most of them belong in jail."

Maraga said the panel of judges had not yet had time to write a "reasoned and well-considered judgement" since hearings closed on Tuesday night, so he only read out the court decision, promising a full ruling later.

A NASA official and lawyer, James Orengo, had argued that irregularities -- including unsigned and fake tally forms, hacked servers and deliberate miscounting -- had affected around one-third of the 15.5 million votes cast.

But lawyers for the election commission and Kenyatta countered that errors were simply "clerical" mistakes and technicalities that did not affect the outcome of the vote.

A report filed by the court registrar found a number of errors in the 41,451 polling station tally sheets -- known as form 34A -- as well as in 291 of the form 34B constituency tally sheets, some of which were unsigned, not stamped, illegible or lacking serial numbers or watermarks.

In addition, the registrar's report found that the electoral commission failed to provide full court-ordered access to its servers, which NASA had demanded in order to back up its allegations of hacking.