"I know for a fact that they were taken to a place I don't know. I don't know how they are." 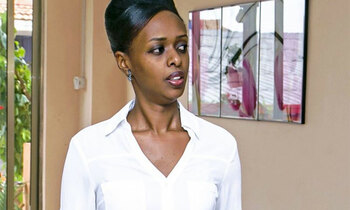 An opposition figure who was barred from challenging Rwandan President Paul Kagame in last month's election has been "taken" by police, her brother said Thursday, a claim authorities have denied.

Police officers took Diane Rwigara and some of her family members to an unknown location on Tuesday night after raiding her house in the Rwandan capital Kigali, her brother Aristide said.

An accountant and political newcomer, Rwigara announced her intention in May to run in the August election against Kagame, who has held held de facto power in Rwanda since 1994.

Nude photographs purporting to be Rwigara appeared online soon after she declared her candidacy. She was later disqualified on a technicality from running against Kagame, who went on to win his third seven-year term with 99 percent of the vote.

Rwigara's family say the former candidate, her mother and four siblings have been missing since the raid.

"I know for a fact that they were taken to a place I don't know. I don't know how they are. Their phones and laptops plus the house was searched while they were held in handcuffs," Aristide Rwigara, who lives in the United States, said by phone.

"This is about silencing my sister because she exposed some things and she speaks her mind against the wrong things that the government of Rwanda is doing."

"The rumour that is currently circulating that Diane Rwigara has been arrested is not true," said police spokesman Theos Badege.

"What is true is that police have conducted a search at her family residence as part of preliminary investigations on tax evasion and forgery."

Rwigara's father was a onetime ally of Kagame and financial backer of the ruling party. He died in a car crash in 2015, with family members suspecting foul play.