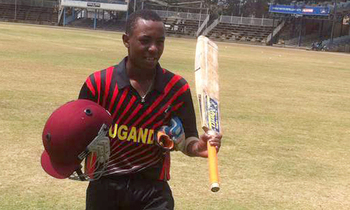 There is no doubt Zephania Arinaitwe makes a huge difference on a rather resilient Mukono Parents side as the UCA Boys Schools Cricket Week continues.

The sallying batsman who was man of series last year was yet again every inch the focal point as the defending champions recovered from an opening shocking defeat to Nyakasura School on Sunday.

Arinaitwe applied himself extremely well with the bat brutally striking a century of  170 from 51 balls in the 130 runs win against Rwanda Select on Monday at Lugogo Oval in group B action and definitely he is no stranger in this club of centuries having scored a century in the initial stages of the Boys'  showpiece last season.

Arinaitwe's stifling performance guided Mukono Parents to 226 in 14.3 overs, setting a daunting target for Rwanda select but still then  Juma Miyaji's 3 wicket haul ensured Rwanda were all out for 35 in such a poor innings despite Orchide Tuyisange's 12 from 5 balls.

Meanwhile, Gabriel Kizza's half ton of 55 from 32 balls fueled Mukono Parents second win against St James SS at Kyambogo. They won by 89 runs.