Some construction companies have been sued in court 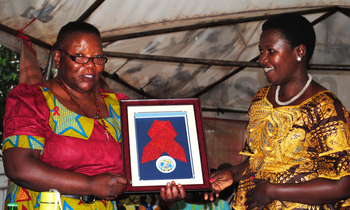 The vice chairperson of HIV/AIDS committee, Evelyn Chemutai, has lashed out at employers who sack their employees when they realize that they are HIV positive, saying HIV is not necessarily a death sentence because with anti-retroviral drugs (ARVs) and good care one can still enjoy a good degree of health and even continue practicing their profession in spite of having HIV.

"True, some construction companies (names withheld) have developed extreme phobia towards people living with HIV and have sacked them. This I must speak out, we have sued these companies that have chased away HIV positive workers and the case is in court," said Chemutai.

Chemutai who is also a Member of Parliament for Bukwo district and also a member of The AIDS Support Organization (TASO) was presiding over the 27th TASO Mulago anniversary and annual general meeting.

She also decried the low male involvement in HIV testing and treatment which frustrates the achievement of the UNAIDS goal of ending the epidemic by 2030.

Quoting the recently released report released by Ministry of Health, Chemutai said that 4.3% men have tested while whopping 7.3%  women have tested, attributing it to compulsory testing during pregnancy.

"I want to task the technical team of TASO to do something so that men also have compulsory testing. Otherwise we may not be able to achieve the UNAIDS 90-90-90 targets. Currently we have 1.2 million people living with HIV in the country," she said.

She also revealed that her committee is investigating the team of alleged medical workers who are giving out forged HIV results to people who are giving them a lot of money to conceal their true HIV positive results.

"You find that many innocent people are being affected. As a committee we are going to various districts to find out who these health workers, who are killing innocent people," she said.

The deputy executive director Josephine Birungi, speaking on before of the director, said they are working with the communities to ensure that people test to know their HIV status and seek treat.

Enumerating  TASO's achievements, Birungi said that by end of July 2017, they had registered 305 new clients ( Female 191 and 114 male) compared to last year's 567, this shows a reduction which is attributed to the availability of  other service providers where clients can access services.

When it comes to care and treatment 97% of TASO clients in care are on ART of those on ART their viral load suppression stood at 92.9% above the UNAIDS target of 90%.

Individual counselling session, she said, totalled to 21193 compared to 10745 of the previous year, because of the intensified home visits and group counselling.

No child was born with the virus, because of the increased Elimination of Mother to Child Transmission (EMTCT), 239 mothers were able to get HIV negative babies from last year to date.

The founder member, TASO Noerine Kaleebo hailed all stakeholders in the fight against HIV and pledged to mobilize members of parliament to become TASO members.