"There is definitely no feedback today," a representative of the auctioneers said, adding that a statement would be issued Monday 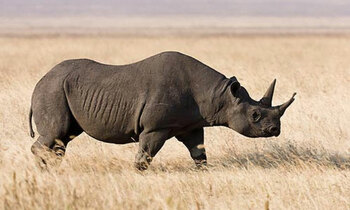 South Africa's first online auction of rhino horn concluded Friday amid outrage from conservationists, but no details of the sale were immediately available.

"There is definitely no feedback today," a representative of the auctioneers said, adding that a statement would be issued Monday.

The Private Rhino Owners Association, which supported the auction, said it expected to hear from the auction's organiser possibly at the weekend.

"They have to do an analysis of the various bids and get average prices," the association's chairman Pelham Jones said.

The auctioneers did not set an opening price for bids, but bidders paid 100,000 rand ($7,626) to register and only registered bidders had access to the bidding process.

The auction was delayed for two days after a legal challenge and protests from conservation groups that argued the sale would fuel poaching and undermine a 40-year global ban on the rhino trade.

Hume, who owns 1,500 rhinos on his farm north of Johannesburg and has amassed six tonnes of rhino horns that he saws off live animals, later secured a permit for the auction.

He harvests the horns by tranquilising the animals and cutting them off -- a technique he says is humane and wards off poachers.

Hume put on the sale to dispose of 264 pieces of horns weighing a total of 500 kilogrammes (1,100 pounds). He is planning a physical auction next month.

The government has not publicly commented on the auction, which came after South Africa's top court lifted an eight-year moratorium on the domestic trade of rhino horns in April.

South Africa is home to around 20,000 rhinos, about 80 percent of the worldwide population, but the country has suffered record slaughter by poachers in recent years.

Poachers have killed more than 7,100 rhinos in Africa over the past decade.

But expert researchers say the going black market rate for the horn in Vietnam is around $24,000 a kilo.