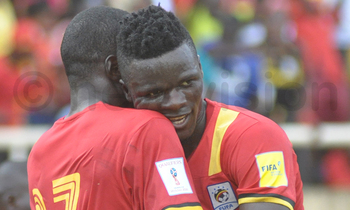 Midfielder William Luwagga Kizito and defender Isaac Isinde are some of the players that interim Uganda Cranes coach Moses Basena has summoned for the double header against Egypt in the 2018 FIFA World Cup qualifiers.

The duo had fallen out with former coach Milutin Sredojevic thus being dropped from the team. They last featured for the national side in the 2017 AFCON Finals in Gabon.

In fact Luwagga vowed not to return to the national team when Micho was still the coach.

Geoffrey ‘Baba' Kizito is other player who rejoins the team after being left out a number of times.

A sizable number of the players summoned is already in the country and kicked off the training sessions this week while the rest will join before the week ends.

Cranes host Egypt in the first leg on August 31st at Mandela National Stadium, Namboole before traveling for the return leg on September 5th at Arab El Borg Stadium in Alexandria.

Uganda is placed in Group E with Egypt, Ghana and Congo Brazzaville. Egypt top the group with six points, followed by Uganda (4), Ghana (1) and Congo (0) after two games played.