Are Nazis as American as Apple Pie? 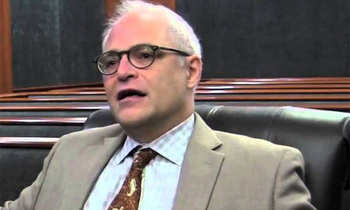 Is the United States threatened by Nazism? The short answer is no, notwithstanding the frightening events in Charlottesville, Virginia, this past weekend.

By the end of the next day, there had also been thuggish violence. One white supremacist went so far as to drive a car into a crowd of counter-protestors, killing one and injuring 19 others.

The groups responsible for the violence in Charlottesville reveled in US President Donald Trump's election last November. And Trump has often hesitated to disavow them; during the election campaign, when former KKK Grand Wizard David Duke publicly backed him, Trump was scandalously slow to reject Duke and his followers. Trump also repeatedly incited violence during the campaign, while evincing a bottomless affection for authoritarian leaders such as Russian President Vladimir Putin.

After the events in Charlottesville, Trump initially offered a bland statement that condemned hate "on many sides," thereby drawing a moral equivalence between the racists and those who gathered to oppose them. Two days later, under intensifying pressure, Trump issued a more forceful statement, in which he explicitly condemned the KKK, neo-Nazis, and other white supremacists, only to revert the following day to blaming "both sides" for the violence.

All of this is abhorrent. But any sober observer can see that the US is still a long way from the nightmarish atmosphere of Germany in 1933. American democratic institutions are holding up, just as they did in the crisis years of the 1930s. Opposition parties have not been banned, and the courts have not lost their independent authority.

Moreover, Trump is not the supreme leader of a political party with a paramilitary arm. There are no facilities such as Dachau, Auschwitz, or Treblinka under construction. Even Trump's planned border wall with Mexico remains stuck in the planning stage, with no funding from the US Congress. And Congress is not about to pass an Enabling Act conferring dictatorial powers on the president, as the Reichstag did for Hitler in March 1933. Last but not least, the American press is more tenacious and energized than it has been in years.

Trump's yearning for authoritarian rule is clear for all to see. But he will not achieve it. There will be no Nazi dictatorship in America.

But whether America is threatened by such a dictatorship is not the right question. American democratic institutions might be holding up, but history has taught us that they are not immune to the machinations of racially virulent political programs. In fact, the US produced some of the laws that would later serve as a foundation for the Nazi movement in Germany.

America, with its vibrant democratic institutions, was the leading racist jurisdiction in the world in the early twentieth century. An obvious example is the Jim Crow South, where white legislatures passed laws imposing racial segregation and reversing many of the gains of the post-Civil War Reconstruction period. But that is hardly the only example. Those on the far right in Europe also admired America's early-twentieth-century immigration policies, which were designed to exclude "undesirable" races. In his manifesto Mein Kampf, Hitler singled out America as "the one state" that was progressing toward the creation of a healthy race-based order.

Indeed, during this period, 30 US states had anti-miscegenation laws intended to safeguard racial purity. America's democratic institutions did not stand in the way of such policies in the early twentieth century. On the contrary, anti-miscegenation laws were the product of America's democratic system, which gave full voice to many Americans' racism. And US courts upheld these legal innovations, using flexible common-law precedents to decide who would acquire the privileged status of "white."

The Nazis paid close attention. As they concocted their own racial statutes - the Nuremberg Laws of 1935 - they pored over American race law as a model.

So today, instead of asking whether American institutions will survive the Trump presidency, we must ask how American institutions can be put in the service of wrongful ends. After all, while America's early-twentieth-century race laws are gone, it still has the same overheated democratic order and common-law flexibility that it had back then. These institutions might no longer produce Jim Crow laws; but the American criminal-justice system, for example, remains a poster child for institutionalized racism.

Americans should be ashamed that their country's institutions laid the groundwork for Nazi race law. But they should not be worrying about the threat of renascent Nazism, despite Trump's clear ambivalence in condemning white supremacists. Rather, Americans should worry about the potential of their institutions to facilitate evils that are, as loath as we are to admit it, as American as apple pie.

James Q. Whitman is Professor of Comparative and Foreign Law at Yale Law School, and the author of Hitler's American Model: The United States and the Making of Nazi Race Law.