"Each degree Celsius increase in global mean temperature is estimated to reduce average global yields of wheat by six percent." 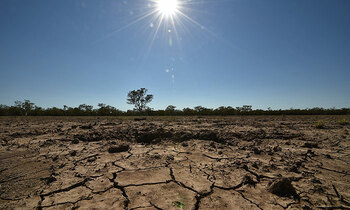 PIC: The sun scorching the already cracked earth on a farm in the Australian agricultural town of Walgett, 650 kilometres (404 miles) northwest of Sydney. (AFP)

Climate change will have a negative effect on key crops such as wheat, rice, and maize, according to a newly released major scientific report that reviewed 70 prior studies on global warming and agriculture.

Experts analyzed previous research that used a variety of methods, from simulating how crops will react to temperature changes at the global and local scale, to statistical models based on historical weather and yield data, to artificial field warming experiments.

All these methods "suggest that increasing temperatures are likely to have a negative effect on the global yields of wheat, rice and maize," said the report in the Proceedings of the National Academy of Sciences, a peer-reviewed US journal.

"Each degree Celsius increase in global mean temperature is estimated to reduce average global yields of wheat by six percent," said the report.

Rice yields would be cut by  3.2 percent, and maize by 7.4 percent for each degree of Celsius warming (almost two degrees Fahrenheit), it added.

"Estimates of soybean yields did not change significantly."

These four crops are key to the survival of humanity, providing two-thirds of our caloric intake.

Changing temperatures would likely cause yields to rise in some locations, said the report.

But for the most part, the overall trend planet-wide is downward, signaling that steps are needed to adapt to the warming climate and feed an ever-expanding world population.