Katatumba is hailed for using her fame and fortune to spearhead causes that help the disadvantaged in Uganda. 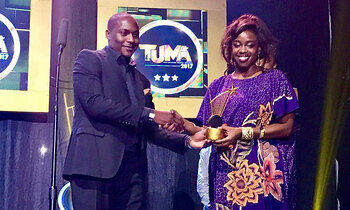 KAMPALA - Singer Angella Katatumba has once again scooped the Best Humanitarian Award 2017 at The Uganda Music Awards (TUMA) held at the Kampala Serena Hotel on Friday.

In a documented profile, Katatumba, who is also the Acting Honorary Consul of the Islamic Republic of Pakistan in Uganda, was identified as a great woman of integrity and an international artiste who has helped the community through her timeless philanthropy work which keeps on inspiring many.

For You Gulu Project

Katatumba has been popularly lauded for being one of very few local artistes who use their fame and fortune to spearhead causes that help the disadvantaged in Uganda. Her humanitarian work dates back to 2006 when she set up the Angella Katatumba Development Foundation (AKDF), a charity organization, to boost efforts to rehabilitate the people of northern Uganda, with particular focus on Gulu, after the Lord Resistance Army (LRA) war that ravaged the region for decades.

In 2010, the British Council appointed her as the International Climate Change Icon in Uganda.  Katatumba. She composed a song ‘Let's Go Green' which was used to promote the organisation's campaign of the same name.

The British Council is the United Kingdom's international organisation for cultural relations and educational opportunities.

At the time, the British Council partnered with Makerere University to re-green Uganda, starting with 30 million tree seedlings in two years. Under the deal, Makerere University used the Biotechnology Laboratory at the university's main campus and the Tissue Plant Laboratory at Kabanyolo to grow the tree seedlings which were offered to residents willing to plant them around the country free- of-charge.

She mobilized donations and services that were delivered to Mulago Hospital. Under the initiative, businessman Gordon Wavamunno, donated brand new clothes, blankets and other items to the Maternity Ward of Mulago Hospital. Kampala Pharmaceutical Industries (KPI) painted the entire Pediatric Ward while Prof Katatumba and his staff painted the Hospital Wards and Halls.

In January 2016, she personally donated sh10m for a phototherapy machine and syringe pump to the Intensive Care Unit at Mulago Hospital, which today saves more than 60 babies born premature every single day.

The same year, Katatumba donated sh15m of the proceeds from her Mulago Yaffe concert held at the Kampala Serena Hotel, to the Uganda Cancer Institute of which she is the face.

This year, the singer's Mulago Yaffe team, together with the Diplomatic Corps, donated sh185m to the same Uganda Cancer Institute, as the proceeds from the Annual Black Tie Dinner.

In May last year, the singer was invited by Stephen O'Brien, the Under-Secretary General for Humanitarian and Emergency Relief, to attend the first ever World Humanitarian Summit in Istanbul, Turkey.

The World Humanitarian Summit, an initiative of the UN Secretary-General Ban Ki-moon was to reaffirm the UN's shared responsibility to humanity, and to agree to a concrete set of actions to enable all stakeholders - including leaders of governments, humanitarian organizations, affected populations, and the private sector - to better prepare for and respond to humanitarian crises.