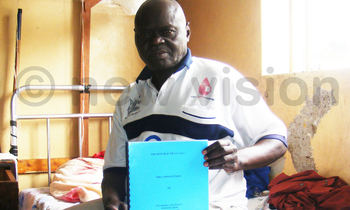 The Lugbara Kari prime minister, Haruna Ndema has passed way at Arua Regional Referral Hospital at around 9am.

Ndema was admitted at the hospital three weeks ago battling diabetes after a lengthy battle with diabetes.

He was born on 15th July 1950 at Okavu village, Naro Katrini Sub County in Terego County, Arua district. He was born to late Rajab Ismael Andruvule and late Ainirua Istabua.

Several leaders have mourned him after receiving the news of his demise.

A tearful Jason Avutia, the Agofe of Lugbara Kari said he was saddened after receiving the news of Ndema's death.

"I received the sad news from Jafar Olekau who has been too close to Haruna and this has made me break down since he has being coordinating all the activities of the cultural institutions because of my sickness" Avutia said.

Avutia has appealed to the Lugbara people to unite and emulate the peace and unity preached by Haruna while pursuing his duty.

He managed to link the Lugbara Kari with government since 2001 and led to the Ministry of Gender, Labour and Social Development recognizing them as a cultural institution.

Martha Tiko the Lugbara Kari minister for finance planning and administration, noted that much as Ndema was battling diabetes, he was managing it until his condition worsened when he stepped on a nail which pricked his foot  through the shoes thus hospitalizing him.

"I will remember him for being strong and advising us on to live together in West Nile without segregation" Tiko said.

Jack Kokole Mawa the coordinator of people living with HIV/AIDS said Ndema managed to support them and helped in lobbying different people regardless of tribes.

Ndema will be laid to rest on Tuesday at his ancestral home in Okavu.