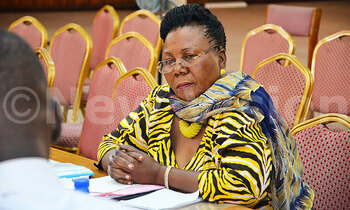 The road is part of a multinational project involving Uganda and Kenya dubbed the Kapchorwa-Suam-Kitale and Eldoret Bypass roads project.

To support the project, government is seeking parliament's authorization to allow it acquire the loan from the two banks.

The Ugandan government is expected to also contribute $11.28 (about 40bn) towards the project.

The 73km-long Kapchorwa-Suam road in the eastern part of the country is part of the overall 150km-long regional project.

It (Ugandan section) traverses north of Mt. Elgon National Park through the districts of Kapchorwa, Kween and Bukwa, ending in Suam at the border with Kenya.

The Ugandan bit of the project is scheduled to be implemented during the period 2017 to 2021.

State minister for planning David Bahati told the parliamentary committee on national economy towards the end of last week that the ADB loan would be repaid within 25 years, including an eight-year grace period.

The ADF loan repayment period is 40 years, including a grace period of 10 years, he added.

The Uganda National Roads Authority (UNRA) will implement the Kapchorwa-Suam project, Bahati to the committee.

So what is the current status of the road?

"Despite the periodic maintenance operations by UNRA, due to black soils, the existing gravel road seriously deteriorates and becomes impassable whenever it rains," explained the minister.

Committee chairperson Syda Bbumba (Nakaseke North MP) said government should take into consideration local content provisions while negotiating loans, implementing projects and negotiating with investors, so that Ugandans can benefit from the transfer of skills and technology as well as gain employment.

She said the loan request will be tabled before Parliament for debate to pave way for more views from the entireHouse.

On her part, UNRA executive director Allen Kagina said she will ensure that at least Ugandans are also employed under the project.

She said UNRA will implement the project and has organized social sensitization and awareness programmes and activities about HIV/AIDS, sexually transmitted infections, as well as road safety.

Mukono South MP Johnson Muyanja Senyonga asked if government had budgeted for funds for compensating people whose land and property will destroyed during the project.

In response, Bahati said the estimated total resettlement budget is sh22.9b which will be funded by government.

For the Kapchorwa-Swam road, it is estimated that as many as 2,564 people will be affected, according to Bahati.

Buvuma Island MP Robert Migadde proposed that the parliamentary committee should tour the road construction project  to carry out their oversight.

His proposal was acknowledged and as such, the team is expected to tour the project before passing the loan.