We did not ban age limit debate — Police

A report indicated that IGP Gen. Kale Kayihura had banned the debate in universities 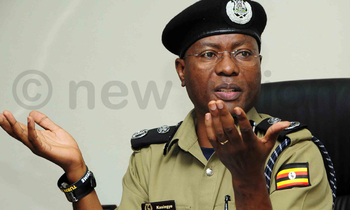 The Uganda Police Force has dissociated itself from reports that it has slapped a ban on debate on the alleged impending bid to lift the presidential age limit, which would allow candidates above 75 years of age to contest for the highest office in the land.

In a statement released today by Police spokesperson Asan Kasingye, the force says any reports carrying such suggestions are malicious and only intended to paint the force and IGP Gen. Kale Kayihura in bad light.

On Friday, a local publication reported that it spoke with Kayihura, who indicated he had banned the debate in universities. It further indicated Kayihura had alerted all commanders across the country to deal sternly with anybody discussing about age limit in schools, villages, and any public places. The report said Kayihura blessed debate only in Parliament.

But in a statement,  Kasingye said: "We reject those assertions as wrong…The IGP did not use those words as alleged…As an officer who upholds and observes the rule of law in this country, he did not give any orders or instructions to any of his officers to ban public debates in universities as alleged".

"In addition the Police are well aware that universities and tertiary institutions are learning environments, where open and robust expressive activities are highly promoted."

"We do encourage universities to continue facilitating openly such expressive activities with total respect to the law," the statement added.

The development comes at the time when there is heightened suspicion that some individuals want to smuggle a petition in Parliament to amend article 102 (b) of the Uganda Constitution that puts a cap on presidential age at 75.

If the amendment were successful, President Yoweri Museveni, who is 72, would legally be able to run in 2021.

The President has, however not publically indicated whether he is open to the idea of contesting after his current term comes to an end.