AfDB in $2b partnership with Islamic Development Bank

The two banks agree to complement and make use of each other's staff expertise at country-level. 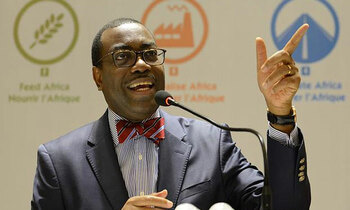 According to a statement released by the AFDB on Tuesday, each of the partners is expected to contribute $1b (sh3.59trillion) to support transformation of the continent over the three year implementation period.

"This is about collaboration and partnership, and we are going to work together on a pipeline of projects in Africa stretching from agriculture to SMES, energy and human development, because we need to create jobs for our women and youth" said Akinwumi Adesina, the AfDB president during the signing ceremony in Cote d'Ivoire.

The two banks also agreed to complement and make use of each other's staff expertise at country-level in the 21 countries where they both command presence on the continent.

The AfDB is a multilateral development finance institution that aims to fight poverty and improve living conditions in Africa through promoting investment of public and private capital in projects and programs that are likely to contribute to both economic and social development.

Bandar Hajjar, the President of the Islamic Development Bank said the areas of partnership are crucial to the economic and social development of the continent.

"We look forward to working with the AfDB in moving SMEs towards industrialization, renewable energy and agriculture and food security.  These areas will create jobs and lead to economic transformation and improve the lives of the people of Africa. SMEs can transform African economies from primary to industrial hubs," Hajjar said.

Earlier in May, the Uganda Development Bank received sh100b from the Islamic bank for onward lending to Small and medium Enterprises (SMEs).

The money is expected to ease access to credit for strategic sectors within the economy, stir job creation, increase incomes and stimulate growth.

Hajjar said the Islamic bank is interested in participating in the acceleration Africa's economic transformation and will contribute to the five growth areas identified by the AFDB.

Africa is the third-fastest growth region for Islamic finance, behind the Middle East and Asia, as the Islamic bank is renewing its commitment to support development in African countries.