Trump admits he has no tapes of Comey meetings 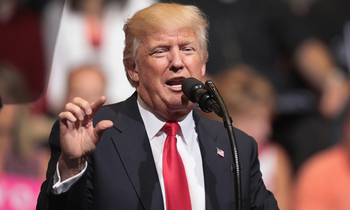 US President Donald Trump admitted Thursday he did not have recordings of his private meetings with fired FBI director James Comey, after maintaining the explosive claim of secret Oval Office tapes for weeks.

"With all of the recently reported electronic surveillance, intercepts, unmasking and illegal leaking of information, I have no idea whether there are 'tapes' or recordings of my conversations with James Comey, but I did not make, and do not have, any such recordings," Trump said on Twitter.

The admission threw a new twist into allegations, fueled by Comey's own claims, that Trump sought to stifle the Federal Bureau of Investigation's investigation into possible collusion between Trump's presidential campaign and Russian interference in last year's election.

Those allegations are believed to now be part of an independent Justice Department prosecutor's probe into possible illegal obstruction of the investigation by the president.

Trump's tweet came after weeks of challenges to the White House to prove the assertion that he might have recordings of his private conversations with his former FBI chief, whom he fired on May 9.

Facing a slew of criticism for sacking the man investigating the Russia scandal, Trump warned Comey there could be retribution if he revealed anything of their private conversations.

"James Comey better hope that there are no 'tapes' of our conversations before he starts leaking to the press!" Trump tweeted on May 12.

That claim quickly raised concerns that Trump, like some US presidents in the past, was secretly recording all of his conversations in the White House.

And it took on more weight when Comey leaked out his own private memorandums of several discussions with trump, in which he described the president as improperly pressuring him over the Russia probe.

In a June 8 hearing in Congress, Comey described several meetings with Trump and said he in fact hoped the tapes do exist, as they would support his description of their discussions.

"I've seen the tweet about tapes. Lordy, I hope there are tapes," he told the Senate Intelligence Committee.

Meanwhile Democrats had demanded Trump come up with the tapes as they sought support for allegations of illegal obstruction of the Russia probe.

On June 9, Democrats sitting on the House Intelligence Committee that is investigating Russian interference in the election and possible Trump campaign collusion demanded the White House turn over any tapes of Comey discussions by June 23.

"Deadline to turn over any tapes of Comey conversations to House Intel -- if they exist -- is Friday. Time is running out for WH to comply," Adam Schiff, the senior Democrat on the committee, said in a tweet early Thursday.