Originally from China, the fruit is imported into Uganda. 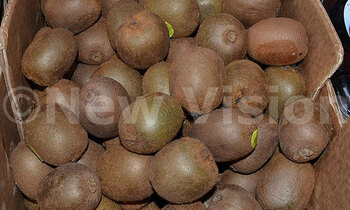 Don't be fooled by its size. The kiwifruit, often shortened to kiwi, is one of the most expensive fruits on the Ugandan market throughout the year.

It has a fibrous, dull greenish-brown skin and bright green or golden flesh with rows of tiny, black, edible seeds.

Originally from China, the fruit is imported into Uganda from countries like South Africa, Kenya, and parts of Asia in order to meet customers' needs, according to Teddy Nabulya, a fruit vendor at Nakasero Market.

Also known as the Chinese gooseberry, the fruit does well in temperate region, adequate summer heat and frequent irrigation which are not the case in Uganda, hence the importation.

Nabulya says most of her customers are retail buyers who purchase the fruit for household consumption.

The gooseberry is among the few fruits that contain a protein enzyme that helps to ease food digestion in the human body, according to Deogratious Opio, a nutritionist in Kamwokya.

"Like other fruits, it contains Vitamin C that helps to build the immune system of the body. Kiwis are also a good prescription to people struggling with body pressure due to its high potassium levels," he says.

At Nakasero and Nakawa markets, one kiwifruit ranges between sh2,500 and sh3 000.

"It being an imported fruit, its price is constant and it rarely goes below sh2,500," says Nabulya.

In upscale supermarkets, the fruit is sold in kilograms where a kilogram contains nine or 10 kiwi fruits ranging between sh25,000 and sh30,000.