Simon Mkina, editor-in-chief of the suspended publication he has received threatening, anonymous phone calls in the days since the suspension 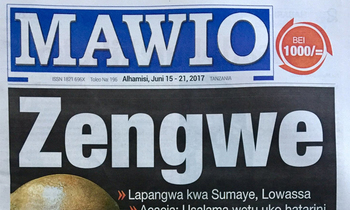 Tanzania's information ministry on Thursday imposed a two-year suspension on the Mawio weekly, a frequent critic of the government, after it linked former presidents Jakaya Kikwete and Benjamin Mkapa to dubious mining contracts.

A recent investigation into the mining deals, ordered by current President John Magufuli, estimated that 75 billion euros ($84 billion) had been lost in tax evasion arising from mining operations since 1998, but did not mention the former heads of state.

Despite warnings, Mawio last week reported comments by opposition MP Tundi Lissu, who told parliament that Kikwete (2005-2015) and Mkapa (1995-2005) were mainly responsible for the controversial contracts and that both should be summoned before an enquiry commission.

Simon Mkina, editor-in-chief of the suspended publication, told AFP he has received threatening, anonymous phone calls in the days since the suspension.

"After the newspaper's suspension, I have received three phone calls threatening me," he said in a telephone interview this weekend.

"One of them, a male voice, asked me if I attached any value to my life. I asked him who he was but he cut off.

"The call did not show a number. So I could not call the person back," he added.

Mkina said he has informed both the board of the newspaper and the police who told him it would be difficult to act as they were  anonymous calls.

The government panel found that the losses were primarily due to the failure of foreign companies operating in Africa's fourth largest gold producer to declare earnings. It blamed flawed contracts unfavourable to the state.

Magufuli accused Canadian mining giant Barrick Gold of "stealing from us" in a live televised address this week, but welcomed discussions when the firm's CEO John Thornton flew to Tanzania last week.

Mawio has already faced a government ban for its coverage of a political crisis after elections late in December 2015 in the semi-autonomous Zanzibar islands. That ban was lifted by the courts.

Despite alleging threats, Mkina said he plans to go to court to challenge his newspaper's suspension.

"We are just negotiating with a good lawyer. We should get to court next week," he said.