Her mother offered to donate a liver but the family could not raise the operation fund. 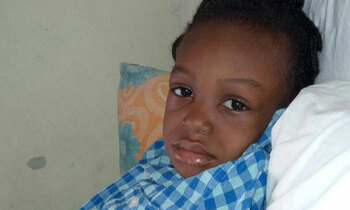 Whoever is kind to the poor lends to the Lord, and he will reward them for what they have done, says Proverbs 19:17.

According to Joshua and Dorcus Mugarura, her parents, Jemina was born July 20, 2013 under normal delivery and had a normal growth like any child.

"When she made 2 years, everything begun to change. She got a fever and abdominal pain around the liver region. She was taken to hospital where a scan was done and it was observed that she had liver abscess which was treated with antibiotics and a biopsy done," Mugarura narrates.

She became fine and the results of the biopsy showed no malignancy; however, follow up scans showed that the mass was still there though it wasn't increasing in size nor reducing, he added.

This year in March, she got abdominal distension and when another CT scan was done, it was discovered that the mass was too big and it was haemangioma.

Paediatric Surgeons were consulted and couldn't manage her case in Uganda and they referred her to India for further management.

The diagnosis by India expatriate doctor indicated that they could remove the mass and the liver grows again but it required quite a big amount of money. This money was fundraised and Jemimah travelled together with the mother for the mass removal.

However, another diagnosis was made before the operation and it was noticed by the doctors that the mass had eaten up 80% of the liver and she therefore needed a liver transplant operation costing $35,000 (sh100m) and a liver donor.

Her mother offered to donate a liver but the family could not raise the operation fund.

You can save Jemimah by donating whatever amount you can. Kindly send any contribution to 0778-446207 in the names of Ethel Katasi or 0758374346 in the names of Dan Sekabira.