Despite producing a few golden performances the Seals did enough grabbing several silver and bronze positions to win. 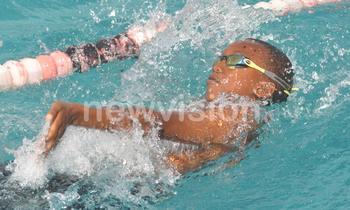 Mudanye stood out in the newly introduced 8 and under category to help her side defend the championship they won from the same venue last year. She was part of the girls' team that topped the girls' team scores with 2,010 points, a feat that stengtheen their championship claim.

But it was the Silverfin that finished second overall, which produced the best individual performances, winning six of the nine individual medals.

But probably the swim of the tournament was produced by Alexis Kituuka (1:18.41) when she beat the more experienced Selina Katumba (1:18.67) in the 100m butterfly race, by 26 micro seconds.

Despite producing a few golden performances the Seals did enough grabbing several silver and bronze positions to win.

For competing with a disability (one hand) against the rest Malta Swim Club's Husna Kankundakwe (Malta) was picked as the DStv Kids Ambassador after the two-day event and consequently walking away with a DStv Explorer decoder.

Next on the USF calendar is the Seals International Invitational due July, 6-9 at Kampala Parents School pool.