AMISOM trained to prevent use of child soldiers

AMISOM has been working closely with the Federal Government of Somalia 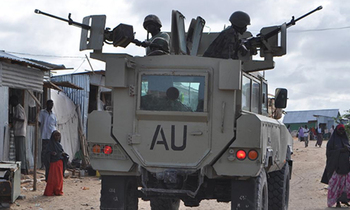 Soldiers serving under the African Union Mission in Somalia (AMISOM) including the Uganda Peoples Defence Forces (UPDF) have completed a three-day training on preventing recruitment and use of child soldiers in armed conflict.

The exercise organised by AMISOM's Protection, Human Rights and Gender Cluster, held in Mogadishu, is part of the ongoing in-mission training activities for uniformed personnel from AMISOM Troop Contributing Countries (TCC's), according to information from Mogadishu dated June, 1 2017.

Closing the workshop, the Acting Head of the Joint Mission Training Centre (JMTC), Charles Debrah asked the participants to apply and share the knowledge acquired with the Somali National Security Forces to help protect children from being exploited by armed groups.

He said that coordination between AMISOM and Somali Security Forces would help break the cycle of violence and end recruitment and use of children as soldiers in the country, the statement said.

"Children have the right to grow as children and actualize their full potential. Separating the children from the ongoing conflict will promote a rapid return to peace," he said.

AMISOM Child Protection Advisor, Musa Gbow commended the participants for their commitment and active participation during the training.

He entreated them to exercise professionalism and uphold the international standards and values on human rights when dealing with children.

Lieutenant M.M Mirni, who spoke on behalf of the participants, thanked the facilitators for organising the training, saying they will share the knowledge with their Somali colleagues.

"We leave here today fully equipped and with a change of mind and promise to implement what we have learnt in our areas of operation. We need this training to be extended to other contingent members. From today we are ambassadors of children and will remain vigilant to eliminate the use of child soldiers across Somalia," Mirni noted.

AMISOM has been working closely with the Federal Government of Somalia to stop the recruitment of children by Al-Shabaab militants as child soldiers.