The first quarter results came in better than most forecasts for Twitter. 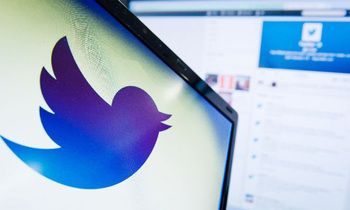 Twitter shares surged Wednesday after its quarterly update showed improving growth in user numbers, offsetting concerns over a decline in revenue and another net loss for the social network.

The first quarter results came in better than most forecasts for Twitter, which has struggled to keep pace in the fast-moving world of social media.

Net loss narrowed to $62 million from $80 million a year earlier for Twitter, which has never reported a profit.

Revenues meanwhile fell eight percent to $548 million -- which would normally be troubling for a social media group, but the figure was not as bad as feared.

"This past quarter has given us a lot of confidence in our focus and execution and excitement for our path ahead," Twitter chief executive Jack Dorsey told a conference call.

"We're delivering on our goal to build a service that people love to use, every day, and we're encouraged by the audience growth momentum we saw in the first quarter," he said in the earnings release.

Twitter shares rallied 7.8 percent to close at $15.82, the highest level since February, suggesting an easing of fears about the path forward for the micro-blogging service.

Dawson added in a blog post that Twitter still faces challenges from revenue declines but that "the improved user growth and some signs of increased advertiser investment are more reassuring for long-term growth."

Brian Wieser of Pivotal Research said Twitter's results were "better than expected, with generally positive user trends" but that it still faces a difficult road ahead.

"Twitter may need to raise additional cash to fund its business given the degree to which it needs to continue spending to support an optimal business plan," Wieser said in a research note.

"Investor sentiment around Twitter will undoubtedly swing wildly around recent momentum in any given direction, making the stock itself riskier than the company in many ways."

Twitter has been seeking to broaden its appeal beyond its core user base of celebrities, politicians and journalists, ramping up efforts in video and live sports, notably.

But the company has failed to live up to early expectations, while Facebook and other social networks have been growing at a faster pace. As a reminder of Twitter's woes, Facebook-owned Instagram on Wednesday reported it has 700 million users, while the leading social network itself has more than 1.8 billion.

It remains to be seen if Twitter will reap benefits from the prolific tweeting of President Donald Trump, who uses the network to connect with his base, and often to make policy announcements.

Twitter chief operating officer Anthony Noto told analysts on the conference call there is "some evidence that we benefitted from our new and resurrected users" who follow politics.

He suggested the trend was being driven both by political players' growing use of the platform, and the fact major news organizations are increasingly migrating onto Twitter.

"As you know, we believe Twitter is the best at showing you what's happening in the world and what's being talked about," he said.

"Having the political leaders of the world as well as news agencies participating in driving that, is an important element to reinforcing what we're the best at."

Advertising continued to make up the lion's share of Twitter revenue -- but ad revenues were down 11 percent from a year ago to $474 million.

A tweet from Twitter's investor relations arm noted that "we continue to expect revenue growth to meaningfully lag audience growth in 2017."