He reportedly found his wife having sex with another man in a lodge. 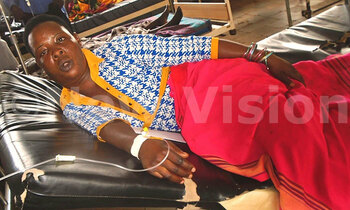 IGANGA - A 32-year-old woman is lying in critical condition at Iganga Main Hospital after her husband reportedly stabbed her using a knife over alleged infidelity.

The man fled after committing the said crime.

It is understood that he found his wife Zabra Nambi in bed having carnal knowledge with another man in a lodge.

This was reportedly in the same area where the couple reside - Bwondha landing site, Malongo sub-county in Mayuge district.

Nambi was later taken to hospital by sympathizers after her husband taking off. He is still on the run.

She was found lying on the hospital bed with no relative on her bedside. She can neither speak nor eat due to neck swelling. Her mouth is agape all the time.

The medic monitoring her said Nambi's situation is worsening and that the health facility will not manage her and will instead refer her to Jinja or Mulago for further medical attention.

The police spokesperson for East Busoga region, James Mubi said that they have started hunting for the husband on charges of attempted murder.