At this material time we are looking at the comparative advantage in the ongoing by-elections. We are focusing resources on Kamuli and other areas where our chances of winning are high," FDC's Mwiru said 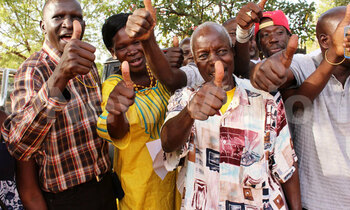 The major Opposition political parties have explained why they decided not to field any candidate for Moroto by-election.

Atyang was the only candidate for Moroto Woman MP seat that Joyce Acan, the returning officer for Moroto, nominated by the close of the nomination days on Friday.

She was accordingly declared elected unopposed by Acan.

Forum for Democratic Change (FDC) deputy secretary for publicity, Paul Mwiru said they did a research and discovered their chances of winning the seat were slim.

"It is not only about fielding a candidate; it is also about resources and manpower. At this material time we are looking at the comparative advantage in the ongoing by-elections. We are focusing resources on Kamuli and other areas where our chances of winning are high," Mwiru said.

Democratic Party (DP) president Norbert Mao told New Vision on Saturday that nobody from his party applied to contest for the seat.

"DP did not put up a candidate because no one applied," Mao said.

His Uganda People's Congress (UPC) counterpart Jimmy Akena declined to state why they failed to front a candidate.

"Moroto is one of those places where no one fielded a candidate. UPC, DP and FDC did not put up candidates. We all wish her (Atyang) the best," he said.

The family to the former Moroto Woman MP Annie Logiel had fronted her niece, Atyang, to replace her in Parliament, a move some observers said would attract a sympathy vote.

Logiel, who was the first time MP, died in February in Denmark where she had been flown for treatment.

She died of a tumour and was buried at her ancestral home in Nakapelimen village in Nadunget Sub-county, Moroto.


The seat fell vacant following her death and the electoral commission had set April 26 as the date for the by-election and campaigns were to commence on April 10 and stop on 25 of the same month.