With further poor conditions forecast, one option for organisers could be to bring the race forward from Sunday to Saturday as a precaution. 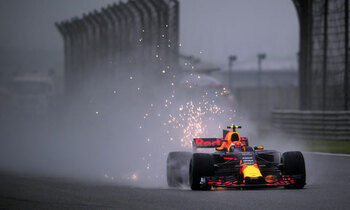 Smog and damp weather combined to interrupt morning practice and force the cancellation of the afternoon running without title hopefuls Lewis Hamilton and Sebastian Vettel logging any timed laps.

Formula One officials also said the race's medical helicopter would not have been able to land at a suitable hospital in the city, where poor visibility had caused a number of commercial flight delays.

With further poor conditions forecast, one option for organisers could be to bring the race forward from Sunday to Saturday as a precaution, while Hamilton offered an alternative suggestion.

"Sat program: 3 practice sessions, qualifying Sunday morning and then race. Who's down for the switch up?" he tweeted.

The three-time world champion, who alleviated some of the boredom by running over to the vast main grandstand to throw signed baseball caps to screaming fans, added: "Seriously tho, this could actually be a blessing in disguise. A chance for new bosses to be proactive & be creative."

Hamilton later told reporters: "The track was absolutely fine and we could have run all day today with no issue it if weren't for the clouds.

"It's not good for the fans watching on TV and even worse for all those people in the stands who have paid money to come out here from the city or even from other countries."

More than half the drivers got a crack at the boggy circuit during a curtailed morning running, with Max Verstappen of Red Bull getting around the quickest.

But the situation delayed the hotly anticipated resumption of hostilities between Mercedes and Ferrari.

Hamilton and defending champions Mercedes have vowed to bounce back after their wake-up call in the season opener in Melbourne two weeks ago, where Vettel steered his Ferrari to a commanding victory.

Forlorn drivers sat in the pits or in their cars Friday as they waited to see whether the afternoon's practice would ever get under way before time eventually ran out.

Drivers will have a final chance at practice on Saturday before afternoon qualifying -- if the air clears up.

Times were slow as teams ran full wets during the short Friday session.

It was treacherous going for Kevin Magnussen of Haas, who spun out twice, and Renault's Nico Hulkenberg beached his car on a gravel embankment and had to abandon it.

Hamilton recalled the "wheel-to-wheel" battles of his go-cart driving days, saying Thursday that he looked forward to a season-long fight with Vettel.

"I yearn for those kinds of battles," said the Briton. "I'm dying for that day to come again and I hope that happens with me and Sebastian."

Ferrari have shown impressive early pace, with 2007 champion Kimi Raikkonen taking fourth in Australia and signs pointing to another tight battle between the two top teams in China.