Russian boxer trains in Kampala ahead of fight 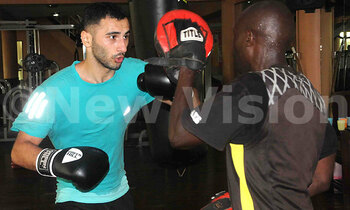 KAMPALA - Russian professional boxer Shahin Adygezalov is in Kampala training for a Universal Boxing Organization title against Tanzanian Amos Mwamakula in the Welterweight.

This will be the main fight of the day come April 23 at the New Obligato Pub at Bat Valley near Wandegeya.

The title dubbed ‘The Last Man Standing' has been organized by Baltic Pro Box Promotions that has boxers in Uganda, Russia and the Nordic countries, according to proprietor Eddie Bazira.

Shahin, 23, who is being handled by Ugandan coach Charles Semakalu, has a professional record of eight fights - all won by knockout (KO) - since turning professional in 2013.

"We are still match-making for their fights with foreign opponents for non-title contests," said Bazira.